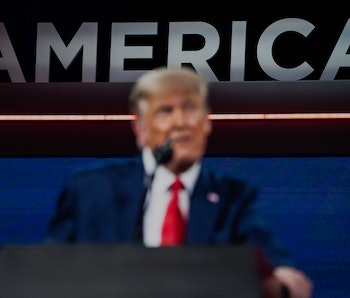 Former President Trump has a new microphone. Today, his team launched “From the Desk of Donald J. Trump,” a website where Trump can post comments, images, and videos in a format that looks strikingly similar to Twitter, one of the many platforms he is banned from using.

Trump has reportedly contemplated launching his own social media platform since being banned from major sites following the January 6 riot at the U.S. Capitol. It’s not clear if this website is part of that plan.

It’s a blog — If so, it’s very underwhelming, as the site doesn’t feature any system for others to sign up and comment. It’s basically just a glorified WordPress blog where Trump can yell into the air and nobody says anything back.

The launch comes a day before Facebook’s Oversight Board is set to make a binding decision on whether or not Trump is to be allowed back on the platform. Twitter is holding firm that he will remain banned permanently.

According to Fox News, the website is powered by Campaign Nucleus, a company that creates digital tools for political campaigns to manage voter outreach and other needs. Campaign Nucleus was founded by Trump’s former campaign manager Brad Parscale.

Will anyone listen? — Even though Trump has railed against Big Tech for deplatforming him, his new website ironically features Twitter and Facebook share buttons attached to each post. That’s probably the only way any of his posts are going to get attention — as much as Trump’s followers love him, they apparently don’t love him enough to tune into Newsmax and see his most recent interviews. Trump will just have to hope that links to his new site don’t get slapped with misinformation labels by Twitter and Facebook.

The former president seemed addicted to the feedback loop he got from tweeting and going on Fox News, seeing how he was able to influence the narrative of the day. It will be interesting to see how long he keeps using this new website if nobody tunes in.

The major social media platforms remain under scrutiny for their influence on speech, though alternative sites like Gab and Parler exist on the fringes. It’s possible to launch a “free speech” social network but in practice, nobody really wants to visit those places. And it’s challenging to survive as a business without making concessions to rein in the worst types of speech, which undermines the whole idea.