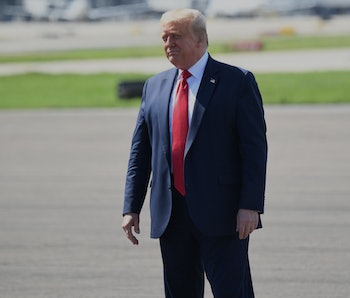 Update: A new Reuters report suggests TikTok parent company ByteDance may completely offload the app to Microsoft instead of holding onto a small stake as it initially planned. It's now speculated that Trump's comment about banning the app was a negotiating tactic.

President Trump doesn't think spinning off Chinese-owned TikTok as an independent company is good enough. "As far as TikTok is concerned, we're banning them in the United States," he said in a statement Friday night aboard Air Force One.

Trump said that he can use emergency economic powers to ban the app, which he intends to do as soon as Saturday. It's unclear how the ban would work, but Google and Apple will likely be expected to pull the app from their respective stores.

Sharp turn — Previous reports suggested Trump would order China's ByteDance, the owner of TikTok, to sell off the U.S. subsidiary. TikTok has reportedly been in discussions with Microsoft and others to acquire it and hold data on U.S. users. Operations outside the U.S. would likely be unaffected. ByteDance also runs a separate version of TikTok in its home country under the name Douyin.

The Committee on Foreign Investment in the U.S. (CFIUS) has been investigating allegations that TikTok enables the Chinese government to access data on American citizens. The committee has the power to order foreign entities to spin off their U.S. businesses if they're deemed a threat to national security. TikTok is already banned in India over similar national security concerns.

TikTok has long denied that it hands over data or censors content under the influence of China's ruling Communist Party. It's been working hard to distance itself from its Chinese affiliation, including by hiring an American CEO and bolstering hiring in the country, among other measures.

Political pawning — There's never been any concrete evidence that TikTok passes data over to Chinese authorities, and the information it collects is not dissimilar from what many other apps gather from their users. It could be compelled to do so though, and politicians in the U.S. have seized on TikTok as a punching bag in the greater tensions playing out between the country and China. TikTok is one of the first major apps owned by a Chinese company to become popular on a global scale.

Many of the same GOP legislators who've raised alarms about TikTok have undermined efforts at meaningful privacy laws, bringing into question the real motivation behind banning the app. Critics say there are much better ways to thwart Chinese surveillance, such as by tightening up the security of internet infrastructure and hardware, like routers, that come from China and include gaping security holes. But this ban seems likely more about the election than true concern.

Is tit-for-tat good? – At the same time, Facebook and other U.S. competitors have capitalized on the fear of Chinese influence instead of fixing their own privacy problems, and Facebook is rumored to be developing its own TikTok clone. Just as it's being probed for being too big, its largest competitor is vanquished. Apparently it's okay for Mark Zuckerberg to spy on anyone even though Facebook has repeatedly allowed user data to get into the hands of bad actors.

The banning of ByteDance's crown jewel is sure to escalate tensions with China, and sets a concerning precedent for the future of a global internet. Access to Chinese apps has benefit to Americans even if they aren't owned by Americans. TikTok likely isn't even nefarious. But if America starts blocking apps like China already does, that means America's stewardship of the global internet falls away and China could spread its influence more easily around the rest of the world.