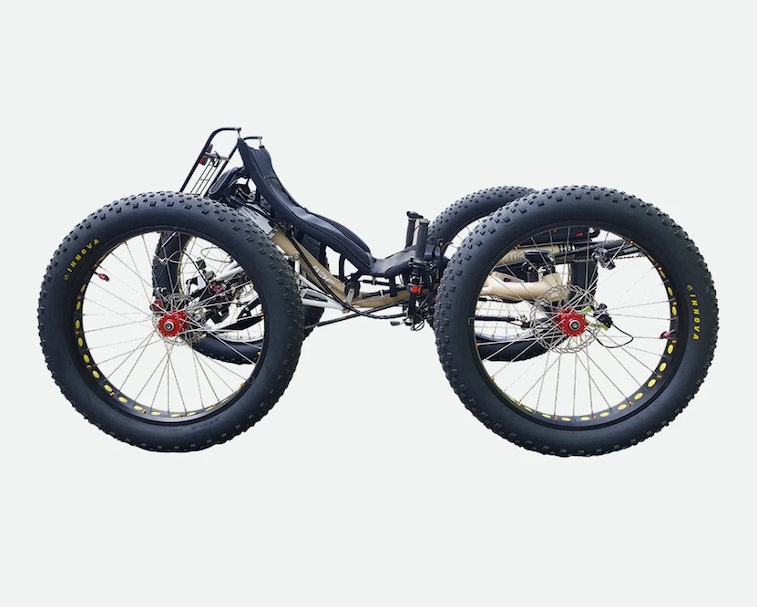 I made a DIY electric mountain bike and now I’m hooked. I can speed over basically any terrain. I rode down some stairs this past weekend faster than any 31 year old has any right to. And yet, I want more.

I asked the internet: How can I take this electric mountain bike experience to the next level? What if we add another wheel? Do they make recumbent bikes with full suspension? So I searched for “off-road recumbent” and the internet responded with a proverbial hold my beer.

Let me introduce you to the contraption of my dreams: The TrikExplor 4WD Off-Road Recumbent Quad-F426E. Just look at it. Imagine an electric mountain bike, but you sit in it like a car. It's like a gokart had a baby with a dune buggy, but street legal (probably.) I love it.

TrikExplor, a Chinese company, has been making recumbent bicycles since 2003 according to its Alibaba pages, and today it offers several models of trikes and quads, some electric, some manual. And of course, recumbent trikes and quads have been around for a long time, but only now are all the necessary pieces for an electric quad, like the Bafang motors, controllers, and batteries, so readily available.

But let’s focus on this 4WD model for a moment, and it is four-wheel drive; apparently you can switch from 2WD to 4WD with a switch in the front. I have no idea what scenario would warrant that kind of control, but now that I know about it I absolutely need it.

In terms of specs, the F426E comes with a 500 or optional 1,000 watt motor, single or dual battery configurations, and independent DNM suspension on the rear wheels. On this model (the F426E), TrikExplor put the motor behind the seat, which is great because it places the weight closer to the center. The F426E also has larger 26 inch tires that provide a higher ground clearance than the 20 inch tires of the F420E. Don’t dismiss the F420E though, because that’s the picture at the top with the little windscreen. Adorable!

In the videos that TrikExplor has peppered around its website, Alibaba page, and YouTube channel, you can see people taking these things through some pretty rugged areas. The important things for going off-road are the tires, ground clearance, and suspension, and with rear suspension and fat tires, what we’re talking about is a little micro-scrambler. Why don’t more people know about this?

TrikExplor doesn’t offer a range estimate on its website as far as I can tell, but since it’s a 48 volt system that weighs a bit more than a normal bike, I would ball-park it at around 30-40 miles per battery. A top range of 60-80 theoretical miles of range in the dual battery configuration is very interesting, especially from a bikepacking perspective (which I am also currently obsessed with.) There’s just enough cargo room on the back side for a larger-sized pack or duffle bag, meaning that you could take just a little more gear or a little more food on a long-distance trip.

On the one hand it’s a shame that TrikExplor’s electrified quads cost between $4,000 and $8,000, but that’s probably just what it costs to make something so specialized at a presumably low volume. On the other hand, what are we doing people? Everyone should be riding these. We should all have tiny garages that we park our tiny quads in. That’s my dream, anyway.