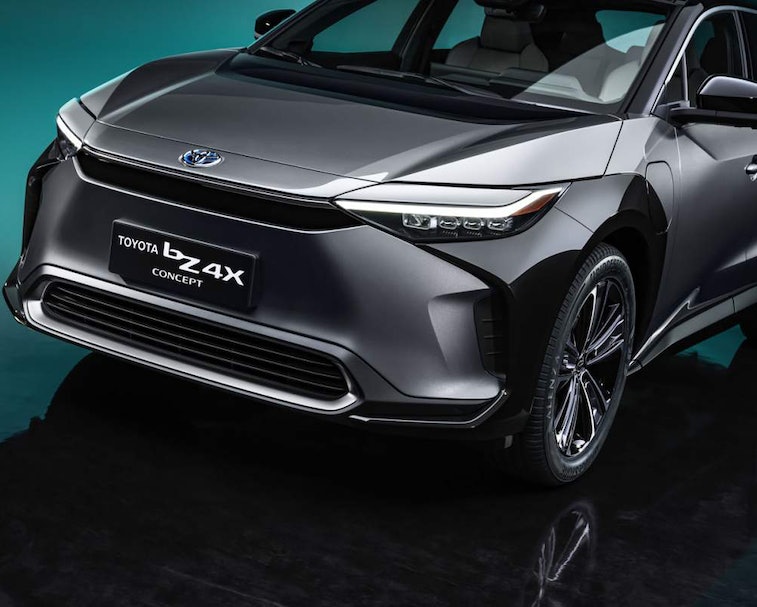 Toyota has unveiled renderings of the bZ4X, an all-electric SUV that may become part of its broader plan for electrification. The Japanese automaker has plans to launch 15 battery-electric cars by 2025.

According to Toyota, the “bZ” stands for beyond zero. Seven of Toyota’s planned electric cars will fall under the bZ lineup.

Toyota quality — There’s not much specific known about the bZ4X, except that it was designed in collaboration with Subaru and will use the e-TNGA BEV dedicated electric platform. Synonymous with long-term reliability, Toyota says the bZ4X will be no different than the rest of its cars.

That’s a bold claim considering the company has focused mainly on hybrids and has yet to enter the dedicated battery-electric market in a serious way. The company does make the Mirai, a hydrogen fuel cell vehicle, but hydrogen fuel hasn’t taken off and, consequently, Toyota sells very few of the cars. It has been developing solid-state battery technology since 2017, however, which could provide its first electric cars an immediate advantage over those from Tesla and others.

Battery tech — Hyundai and GM have both been forced to recall some of their electric vehicles over battery fire concerns. These types of issues are expected as legacy automakers switch from developing combustion engines to ones powered by lithium-ion battery packs, which are fundamentally different technologies. Battery fires typically only occur when an impact causes the battery to be punctured, and automakers like Tesla have implemented improvements in recent years to mitigate potential ruptures and overheating.

Toyota with its strong reputation could be a big foe for Tesla; the latter has been notorious for its quality control issues of late, with cars regularly displaying defects and Tesla’s customer service acting slowly to service customers. The bZ4X would most closely compete with the Model X.

More to come — Unfortunately, Toyota isn’t revealing any information about the bZ4X’s range, charge time, or pricing. It does say that the car’s interior was “designed in an open-concept” meant to enhance driver comfort, and that “every detail of the vehicle was purposefully engineered.”

The bZ4X is set to be built first in Japan and China, with aims to begin global sales by mid-2022. Information on U.S. production will be shared at a later date.

Producing new electric cars is expensive, but legacy automakers have begun racing to do so as the trend becomes all but inevitable and companies fear falling behind their competition. New regulations set to go in place around the world in the next decade and beyond will also phase out the sales of gas vehicles, creating the further impetus for companies like Toyota to make the switch to electric as soon as possible.