“A monopoly by itself isn’t bad if it’s not abused. The question for those companies is, do they abuse it? And that is for regulators to decide, not for me to decide.”

Tim Cook, in an interview with Nikkei Asian Review 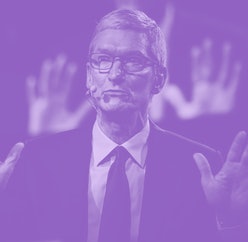 Apple CEO Tim Cook has no problem with the existence of monopolies — what a surprise. The multi-millionaire tech boss shared his thoughts in an interview with Nikkei Asian Review last week, during which he stated that, inherently, a monopoly “isn’t bad.”

No, it’s not the potential for monopolies that poses a problem, Cook said, but the possibility that companies might abuse that power. And whether they do “is for regulators to decide, not for me to decide,” he added.

Don’t worry Tim, they will — Apple has been at the center of antitrust investigations for years due to questionable practices that many claim are designed to crush its competition. Native apps that are locked in as default, steep developer fees and subsequently high premiums, and self-prioritization in the App Store all amount to shady, anti-competitive behavior, critics argue.

It’s not just developers that are mad about it, either. Users have also voiced their concerns about Apple’s dominance in the market, and this past May the Supreme Court ruled that consumers can rightfully sue if they feel their purchases have been affected.

So, it’s not at all surprising that the company’s CEO isn’t against monopolies given its own track record of behavior that is arguably pro-monopoly. But, um, you might want to read the room before speaking next time, Tim.