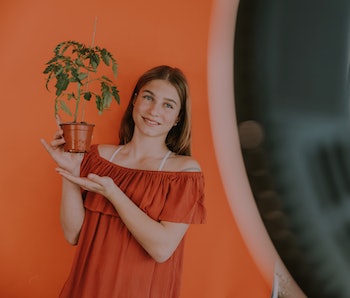 TikTok is now reportedly testing a “Shoutouts” feature à la Cameo, whereby users will be able to request custom videos from their favorite creators. The feature has already shown up for some users in Turkey and Dubai, BuzzFeed News reports.

Based on early screenshots of the feature, it appears the TikTok Shoutouts button appears on a creator’s profile page, once it’s been set up. Shoutouts can be paid for in TikTok coins, the same in-app currency used for tipping. Much like Cameo, there’s a review system for Shoutouts, too, so you can have some sense as to whether or not you’ll actually get your money’s worth out of a particular creator.

TikTok isn’t the first to attempt treading down Cameo’s path; late last year Facebook began testing similar features through its New Product Experimentation arm. It’s just the thing to do, in 2021: Watch what makes an app tick for users and then copy it word-for-word. Netflix is TikTok, now; TikTok is YouTube; Instagram is also TikTok. Does that make Netflix Instagram as well?

And thus the ouroboros of Big Tech draws another few inches nearer to completely consuming itself.

It’s just Cameo by someone else — Everything we’ve seen of Shoutouts thus far demonstrates that TikTok knows exactly what it’s doing in copying Cameo. The feature is very easy to use. Once users click the “TikTok Shoutouts” button on a creator’s page, they’re presented with a price point and description set by the creator, an aggregated review score, and a quick bulleted list about how the process works.

Once a video’s been requested, creators will have three days to accept the assignment. Users won’t actually receive the video for about a week after it’s recorded, though; TikTok has to first review and okay the personalized message. That likely means the Shoutouts will need to fit into TikTok’s tight community guidelines, despite being delivered via DM.

Maybe it won’t happen? — The initial Shoutouts test is very limited. Most users who have seen the feature turn up are in Turkey, with only one Dubai-based user reporting it, and, apparently, TikTok is restricting users in some locations from requesting videos, too.

TikTok hasn’t officially announced the feature, yet, so there’s still a chance it won’t roll out around the world. That would be fine, really; TikTok can keep being TikTok and Cameo can keep being Cameo.

Then again, now that TikTok has built such a feature, it would be a little silly for the company not to open it up more widely. TikTok would profit off the micro-transactions for each video, and users would have a new way to connect with their favorite TikTokkers.