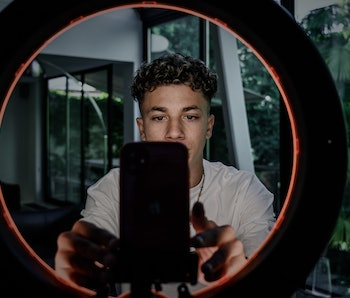 TikTok is no longer the little app that could. The company is expected to hit $500 million in U.S. advertising revenue this year after generating $300 million last year across the entire world. That's still small compared to Facebook or Snapchat, so to get gray suits taking it more seriously, TikTok today launched a website called TikTok For Business where brands can explore all of its available marketing solutions in one place.

TikTok offers several different ad formats including sponsored hashtag challenges and full-screen ads that play for 3-5 seconds. As part of the launch, TikTok also unveiled a new ad format called "Branded Effects" that allows brands to create 2D, 3D, or AR images that users can insert into their videos. Snapchat already offers similar sponsored filters and lenses in its own app.

The new TikTok For Business platform isn't quite like offerings from more mature players. Facebook, Google, and Snapchat all offer self-service platforms where any advertiser, from your local mom and pop to Coca-Cola, can buy advertising through a simple interface. TikTok isn't offering a self-service platform stateside quite yet, though it's coming eventually — this new website is simply a place where advertisers can learn about all the formats offered and best practices for successful campaigns. Advertisers still need to work with a salesperson in order to buy and manage their campaigns.

Brands need an alternative to Facebook — TikTok may have issues attracting some advertisers because its userbase skews very young — mostly teenagers, and thereafter, mostly under the age of 25. That means the audience isn't as valuable as Facebook or Google can offer where just about every age group and level of buying power is represented.

But competitor Snapchat also has a young audience and has managed to deliver strong growth. The Information reports that TikTok's charges far lower advertising rates than Facebook, which could help sell them. Many advertisers who relied on Facebook for years have been shifting their spending elsewhere due to rising costs there. Others are giving the platform a break while it improves its policies on hateful content. And considering that the Facebook-Google duopoly controls nearly 70 percent of online advertising spend, moving some of that money to TikTok could help weaken their dominance and spur more actual innovation.

Virality for sale — TikTok thinks its app is an attractive place for advertisers not just because of cost, but because lots of content that goes viral across the web was created on TikTok in the same way the defunct Vine used to start trends. By paying for sponsored hashtag challenges or AR filters, brands can try and ride those waves and be a part of the conversation.

TikTok has simultaneously been working to separate itself from Chinese owner ByteDance as U.S. regulators consider whether or not they should be broken apart over fears of censorship, which TikTok swears doesn't happen on its app despite some questionable account suspensions. It's expected that TikTok will maintain all data from U.S. advertisers on servers located outside China in order to alleviate concerns about privacy. Whether that's enough to appease the skeptics remains to be seen.