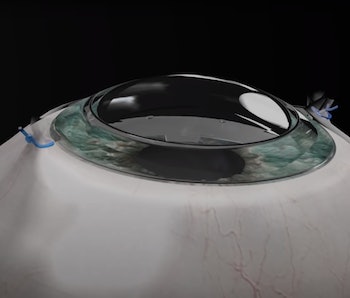 Eyesight is a primary sense of how one perceives the world, so it's not an exaggeration to say that finding solutions to blindness can be life-changing for those with vision loss. One company called CorNeat has made major progress in doing just that with a "synthetic cornea" that can be implanted with minimal surgery.

Tech that's actually helpful — Called the KPro, the implant can be integrated directly into the eyewall to replace a scarred or deformed cornea without relying on donor tissue. A 78-year-old legally blind man in Israel was the first person to receive the procedure. Immediately after the bandages were removed, he reportedly was able to recognize family members and read text.

Quick recovery — The cornea is a layer that covers and protects the front portion of the eye, and it can scar or degenerate over time. There already exist artificial cornea implants, but the surgeries are complex and so transplants are often tried first. Unfortunately, however, only about one in seventy people in need of corneal donors will actually get one. So quick and painless devices could help a lot of people.

The KPro is unique in that it requires little cutting, and within days the implant is naturally integrated into a patient's eye as collagen gradually colonizes on the device. According to CorNeat, the KPro's natural integration offers strong visual acuity, and healing times are exceptionally fast.

“After years of hard work, seeing a colleague implant the CorNeat KPro with ease and witnessing a fellow human being regain his sight the following day was electrifying and emotionally moving, there were a lot of tears in the room,” said CorNeat Vision co-founder Dr. Gilad Litvin. Ten more patients are approved to trial the KPro in Israel, and CorNeat has plans to expand into Canada, France, the U.S., and the Netherlands.