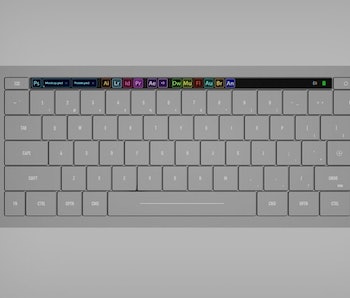 Apple’s Touch Bar has never really found a use-case like the company hoped. While it looks cool, the touchscreen is kind of worse than the old-school function row that it replaced.

But a designer has rethought the Touch Bar as a feature built into a wireless keyboard, and one tailor-made for use with Adobe’s suite of design apps. The result is the 101Keyboard, and it’s quite a nice-looking piece of hardware.

The 101Keyboard, like a MacBook Pro keyboard, has 65 keys (actually 64 in the U.S.) as well as a horizontal touchscreen bar. But the bar here is less complicated than the Touch Bar. It lets you switch between Adobe’s apps, like Photoshop and Lightroom, and displays files across such apps that are presently active. That should make it easy to seamlessly jump between apps and files within a second using one simple tap.

Simplicity — This is just a concept keyboard, but it seems like what the 101Keyboard does well is that it’s simple. The Touch Bar makes certain functions slower. Adjusting volume, for instance, is a tap and a slide, whereas physical keys were just a tap. Functions like backlight adjust have been buried in favor of useless “features” nobody uses, like buttons that suggest the next word to type. The Siri button is also super easy to tap by accident. A product like the Touch Bar should be at least as good as what it’s replacing, but it’s not.

The 101Keyboard, on the other hand, tries to do one thing well. You’re bouncing between cutting clips in Premiere and editing .JPGs in Photoshop? Just tap once to toggle over, and vice-versa. A slider lets you adjust brush size and zoom in any file. Simple.

There’s one problem, though. There are no arrow keys or numpad on the 101Keyboard — if I get a Bluetooth keyboard, I want those. But I’m not a designer! Maybe you design so much that this fast toggling would be useful. It’s just a concept though, sorry.