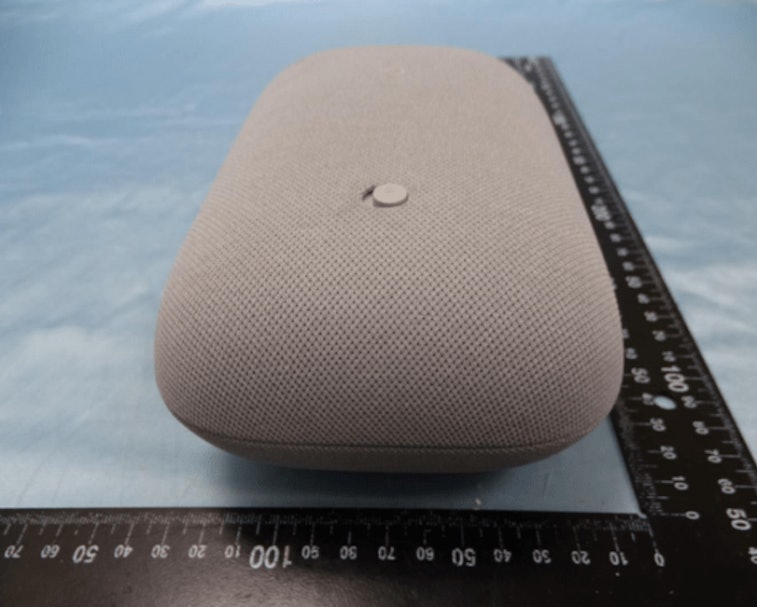 The next iteration of Google's Home speaker has surfaced in new images published by a Japanese regulatory body. The new smart speaker is expected to be called the Nest Speaker, following the rebranding of the Home Mini to the Nest Mini moniker. The images were first discovered by the Twitter account @androidtv_rumor.

It looks fine — The images reveal a speaker that looks less like the existing Google Home and more like the Nest Mini. You might say the Nest Speaker sort of looks like a pillow, or maybe an Apple HomePod that's been stepped on. It features an all-fabric design this time around like the Nest Mini, and there's a new physical switch for disabling the microphones rather than a touch-sensitive button. Based on the plastic (rubber?) on the two sides of the speaker, it seems like the Nest Speaker is meant to sit upright.

Some may not like this new design, though the added fabric should help it blend into a home better than the more futuristic, angled look of the existing Home speaker. Speakers arguably shouldn't really draw attention anyway — they should fade into the background.

Besides the design refresh there's not much more to say about the Nest Speaker. 9to5Google is reporting that it may have larger drivers that will produce noticeably better audio quality over the Google Home. It's unclear exactly when Google may publicly announce the new speaker.

Speaker wars — Google has been unifying its smart home products under the Nest brand, which started out making smart thermostats and was acquired by the company in 2014. Google still lags behind Amazon in the smart speaker market, where Alexa commands roughly 53 percent of the space to Google's 31 percent. Roughly 53 million Americans own a smart speaker.

Google and Amazon both allow third-party companies to integrate the smart assistants into their own products, though Amazon has been much more aggressive about shoving Alexa into as many devices as possible from microwaves to TV remotes with mixed success.

Smart speakers offer the potential to more deeply lock consumers into the ecosystems of Google and Amazon, encouraging users to buy more products and feed them useful data for advertising and recommendation purposes. Applications designed for smart speakers haven't taken off in a serious way, however — general tasks like playing music and checking the weather are by far the most common uses.