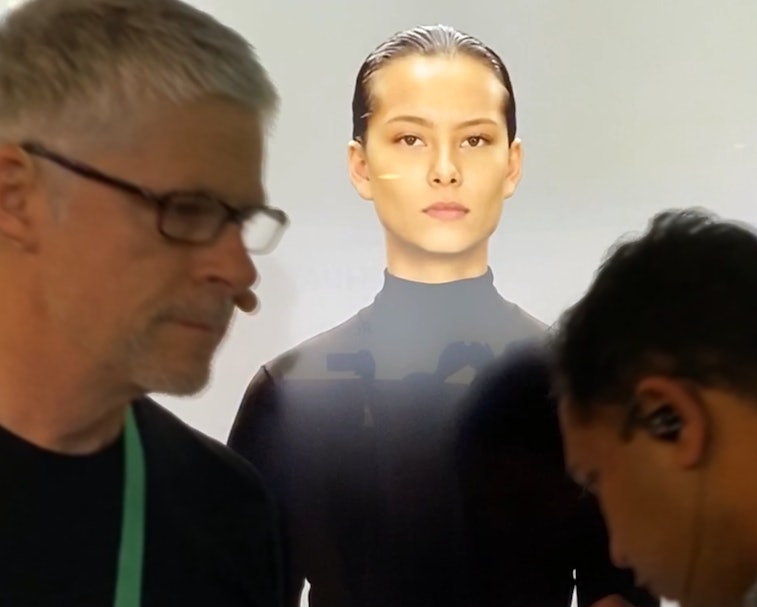 We've finally seen our first live demo of Neon, and if you want to be creeped out, excited, and disappointed at the same time, this is your tech. Samsung just threw on a quick demo preceding their "big show" on the CES main floor, and it was something like watching Westworld, beta version.

An engineer holding a tablet with various controls for the Neon avatars staged a few seemingly realtime demos of two "artificial humans" performing a variety of subtle expressions and actions. There was some noticeable lag between when commands were issued and then enacted, but nothing that your average Siri-user would be surprised by. Then the engineer turned the presentation over to more of a "live" demo where he interacted via voice commands and questions, and things got a little rockier. Lips didn't quite sync up and it wasn't clear how well the system was interpreting his commands (if it actually was a system, and not someone controlling the Neon from behind the screen).

A yellow cable running from the tablet to a hole in wall raised plenty of questions (as did most of the interactions the Samsung team had on display). If the Neon system is running live CGI, it's extremely impressive in terms of rendering, but the AI and voice-responsive parts of the system look like they need some more time in the oven. When a member of the crowd asked one of the avatars if she was married, it seemed to answer the question as "will you marry me?" "I'll have to think about that... for a year." Well, the bot's got jokes, at least.

We'll be updating this post with more impressions and observations as Samsung shows off more (and hopefully says more). Right now my takeaway is that Neon is deeply unsettling in the way it cracks the uncanny valley. There are also questions about whether or not having a middle-aged man "operating" two young girls on screen is good optically (spoiler: I don't think it is).

Later on, Neon lead Pranav Mistry took to the stage and proclaimed, "Neon is just a stopover to the next reality." Like Mistry's Twitter feed, there was quite a bit of lead up to his demo spent talking philosophy instead of showing the real-fake people who may or may not be an actual, functioning product. Despite some early demo sound issues, Pranav was able to show a comparison from 2018 of early experiments of a live talking head and a "computed" version of the same person. They look almost identical, and Pranav was quick to point out that even in the early days of the Neon project, the team was getting very realistic results, especially on details like clothing. "This never happened. This man never wore this shirt," he said.

As the engineers ran through the clearly-rehearsed patterns, Pranav noted that there are "seven million" ways the avatars could smile or frown. Those smiles and frowns are controlled by tablet, of course, at the pleasure of an engineer, but Mistry suggested the remote-control demo was a way to show the power of the CORE R3 engine that supposedly runs all of this (how it does that is not clear at all... responsiveness, perhaps?).

There was an insistence today that Neon has fewer one-to-one consumer applications (say, as a personal service you interact with casually), and is geared more towards the idea that Neon is meant for customer service and businesses that need a front-facing representative. Unfortunately for Mistry and team, the demo failed to show off any of those capabilities. At one point, the entire system seemed to need a reboot, thus forcing Neon's engineers to take us back to the demo we had watched earlier (some of which you can see in the video above). The entire experience felt half-baked and canned. If Samsung wanted to blow anyone away today, this didn't do the job.

Mistry ended the presentation on an apologetic note, saying the team would have a more fully working demo later in the day, and that the full system would really be unveiled towards the end of the year at an event called Neon World (convenient), which makes you wonder why the company was so eager to show off this very early work at CES. "Our goal is to bring an AI-driven being that is virtually real. This is not a bot. We aim to make Neon... more like friends."

Right now the takeaway is that Neon is deeply unsettling in the way its visuals crack the uncanny valley, but it fails to live up to nearly any of the hype that Samsung tried to build around the product. There are also questions about whether or not having a middle-aged man "operating" young girls and doing things like demonstrating how they smile on screen is good optically for the company (spoiler: I don't think it is). Samsung gets points for vision, but until we can interact with a Neon ourselves (don't worry, we're trying), this is just very expensive, elaborate, and actually quite impressive vaporware.