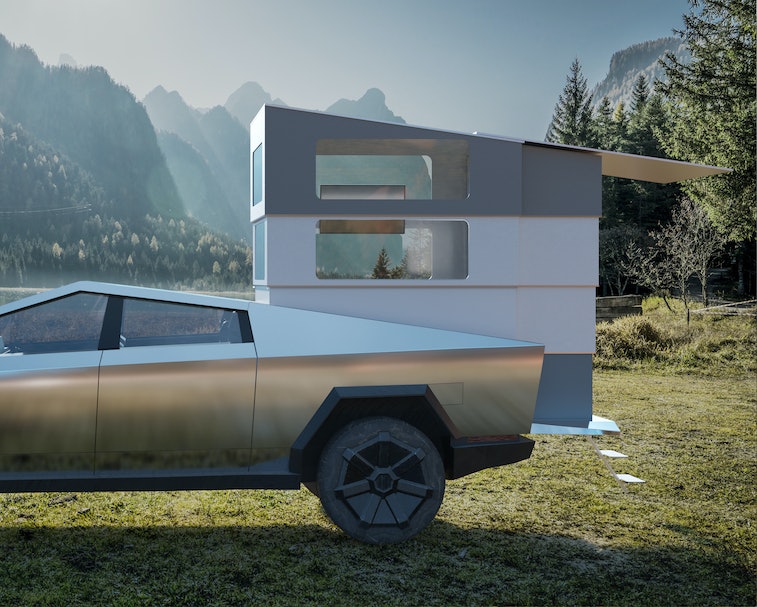 Technoking Elon Musk’s Cybertruck dream hasn’t even hit the streets yet and already add-ons are selling out. One in particular — called the CyberLandr — has now treated itself to a $400 million valuation. That’s on top of reservations totaling something like $50 million in just the first few weeks of pre-orders.

Unlike other camper options, the CyberLandr folds flat to sit neatly inside the Cybertruck’s bed. It’s an inspired choice, by which we mean it seems… impossible? This isn’t just an inflatable tent or the like — it’s supposedly a full camper suite that folds down flush with the Cybertruck. We’re talking bedroom, kitchen, office, and bathroom. All basically in the trunk of this truck.

The CyberLandr is impressive, to be fair. But $400 million impressive? That depends who you ask. True Tesla fanboys will jump at any and every opportunity for new Tesla gear, even if it’s not real yet.

This camper does not exist — Let’s have a quick chat about the CyberLandr. It does not exist. That’s not an exaggeration. Take a look at the below photos. Notice any intriguing trends?

Here’s what we notice: Every one of these images is a render. These are not photos of a consumer-ready product. They’re not even prototype photos. They’re drawings! Nice renders, yes, but renders nonetheless.

That’s because the Cybertruck doesn’t really exist yet, either. CyberLandr’s team can’t try out its designs on an actual Cybertruck and, as such, has no idea it’ll actually work. The video below is the only actual footage we’ve seen of a prototype, and it doesn’t really show much.

The too-good-to-be-true vibe extends beyond just the photos and the general concept. Here’s what the CyberLandr team says in its FAQ about estimated shipping times: “We anticipate CyberLandr will be ready for delivery approximately when Tesla begins producing and shipping Cybertruck to its list of reserved purchases.”

Musk’s fanboys stay winning — Okay, so the CyberLandr is still in the works. Could it be an incredible add-on to one of the most anticipated vehicles in recent memory? Surely it could. Will it be worth the $50,000 price tag (Cybertruck not included)? We can’t really pass judgment on that yet… but you could quite literally buy a second Cybertruck for that price. So.

It will be interesting to watch the CyberLandr’s rollout. If the company delivers what it’s promising, it could usher in an entire third-party Cybertruck market. The company behind the CyberLandr, StreamIt, usually focuses on surveillance technology and AI, though. Can’t say that exactly inspires confidence.