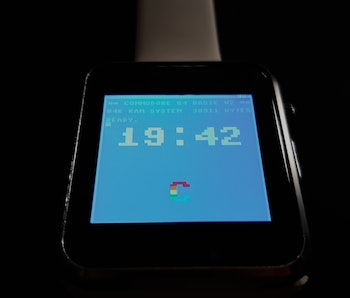 Now you can get your coding fix on the move. Someone has created a smartwatch that lets you write and run BASIC programs directly from your wrist.

About a year ago, Nick Bild bought a LilyGo smartwatch, an affordable wearable that can be programmed to run just about anything. But he didn’t find any watch faces or software he liked, so he decided to make his own operating system inspired by the Commodore 64.

Retro — A custom watch face emulates the Commodore 64’s home screen, complete with a classic “Ready” prompt. But the most notable thing is that the C64 Watch, as he’s called it, includes a built-in interpreter for the BASIC programming language. An actual on-screen keyboard opens so that you can write some rudimentary “if-then” programs from literally anywhere.

Bild understandably says typing on a tiny on-screen keyboard is an awful experience, so he programmed the C64 Watch to let you can plug it into your computer via USB and use your computer’s keyboard as the input.

You probably won’t want to actually code on your watch, but you can make your colleagues jealous that you could bang out some coding practice if you wanted to.

Get yours — If you want to get a C64 Watch of your own, you’ll need to buy a LilyGo smartwatch for $45 and then follow Bild’s instructions to install his operating system.

In the future, Bild hopes to implement a full-on emulator of the Commodore 64’s operating system so that the watch can run original software. We can’t wait to see it run actual 8-bit games, then we’ll actually consider ditching our Apple Watches... or become one of those people who wears two watches.