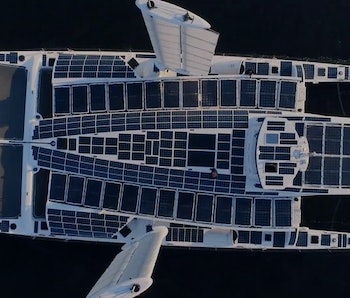 A team has created a boat powered solely on solar and hydrogen power. The Energy Observer, as it's called, generates enough energy each day to power nine homes. It's also 100 percent energy self-sufficient because the electricity generated from the solar panels goes back into breaking down water molecules for the hydrogen fuel cell.

The absolute cleanest travel — How it works is pretty simple. During the day, solar panels atop the roof charge up the boat's lithium-ion batteries. When those are full, any extra energy is used to remove the salt from seawater down below, and then separate the hydrogen from the pure H20. The boat's hydrogen fuel cell, called the Rex H2, was made by Toyota using components from its hydrogen-powered Mirai vehicles.

Hydrogen fuel cells can store more electricity by weight than a lithium-ion battery can, which is an important consideration at sea.

Traditionally a common criticism of "renewable" vehicles is that they get their energy from a grid, which might generate its power using fossil fuels like coal. Hydrogen is "clean," but you need electricity to break down water first, so whether or not you're creating any emissions still really depends on the source of your power and how it's made. But the Energy Observer isn't taking any energy from a grid that might be using dirty fuel. The electricity from the solar panels feeds creation of the hydrogen. Greta Thunberg would be proud.

Hydrogen needs hype — Hydrogen batteries have never really taken off as an alternative to fossil fuels in the way that lithium-ion batteries like Tesla's have. They both suffer from a chicken and egg problem because you need refueling stations to generate sales of cars, but nobody wants to build the refueling stations unless there are cars on the road that will use them. Hydrogen cars pose an even bigger challenge to adoption than electric cars because, since hydrogen is a (clean) gas, you have to fill them up at stations whereas a Tesla can be charged at home. There are very few hydrogen stations around the U.S., and Toyota has only sold about 5,000 Mirai's since 2015.

Tesla through sheer force of will managed to overcome lots of obstacles to make electric cars hot again after a failed start in 2008 by Chevrolet and others. More than a decade later we're finally seeing the major automakers try and catch up after Tesla defied expectations and became the most valuable automaker in the world.

The Energy Observer is supposed to promote clean hydrogen fuel in a similar way. Tesla CEO Elon Musk has called hydrogen power "stupid," though he hasn't elaborated and experts are largely divided on the subject of hydrogen versus electric vehicles. Hydrogen is more expensive than electricity but that largely comes down the adoption issue. If investment into stations increases and more cars are sold, the price would fall as it has for electric. Hydrogen cars refuel much faster than electric.

Because of the expensive hurdles, adoption of both hydrogen and other renewable sources of energy will take committment from governments around the world and investment to scale up the technologies.