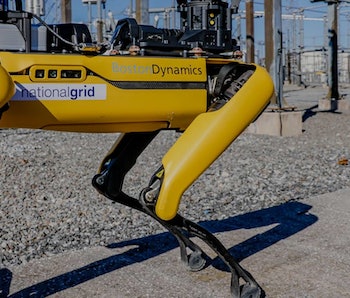 We let them drag us down underground tunnels. We gift them to police departments. We literally strap goddamn assault rifles to them. And now... now we’re just letting them stomp all over our power grids, apparently.

Earlier this week, IBM announced a new partnership with Boston Dynamics alongside the electric and gas utility company National Grid to deploy quadrupedal “Spot” robots with souped-up AI systems for on-site monitoring and maintenance. “Boston Dynamics and IBM are transforming Spot into an intelligent roaming edge device, designing it to give operations staff greater flexibility to inspect and monitor their equipment with dynamic sensing,” explains the press release, adding that Spot-bots are already conducting “regular autonomous inspections” within National Grid power stations.

Responding to issues faster — In the press release, IBM also reveals that it is working with the two other companies to test near real-time interfacing that employs thermovisual analysis of power sites from Spot in an effort to identify problems like hotspots and equipment issues that, “if not corrected, could cause serious equipment failures and power outages.” Sure thing, IBM. “Identify” the problems... not “intentionally cause” them.

Better than the gun one, we suppose — Of course, if we had to choose which terrifying robot to encounter on any given day, we guess we’d opt for IBM and National Grid’s power station Spot over that aforementioned literal tactical killing machine. Designed by two equally sinister-sounding corporations — Ghost Robotics and SWORD International — the Special Purpose Unmanned Rifle (SPUR) is admittedly not an augmented Boston Dynamics product, but its own godawful thing. The only thing worse than a SPUR on its own is the thought of a SPUR roaming a National Grid location... which we imagine is pretty inevitable at this point.