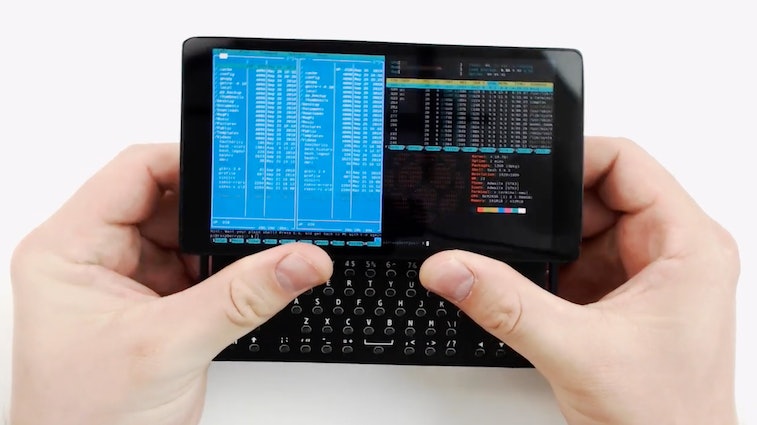 There's something exciting about the idea of building gadgets yourself, free from the compromises or constraints of existing products out there. Maybe you're worried about all the preinstalled services on your phone siphoning data back to an aggregator, or you just don't want your device to stop working when a company decides to stop supporting it. No matter the reason, the Zero Terminal project demonstrates the very real possibility of building your own miniature computer with a Raspberry Pi.

Endless possibilities – Pretty simply, the Zero Terminal is a Raspberry Pi Zero connected to a 5.5-inch AMOLED touchscreen with a 1,200mAh battery. Thanks to a couple of adapters connected to the circuit board, the Zero Terminal has a USB 2.0 port, a microSD slot for the operating system, a mini-USB port, and a power switch. New in the latest iteration of Zero Terminal are 40-pin sockets that can be used to connect additional I/O connections, like extra USB ports or HDMI video out. In the video above showing off the device, the creator of the Zero Terminal connected a slide-out keyboard. The modularity allows for all kinds of possibilities.

You can't run some powerful operating systems like Windows on the Raspberry Pi Zero, of course – it has a very small 1GHz CPU and 512MB of RAM. But slap a radio on there and you can get a little mobile computer for completing basic computing tasks. Even from the Raspberry Pi OS, you could use the terminal to connect to services like Twitter and send out messages and then disconnect the radio to dip off the grid. If you really wanted to make this a powerful pocket computer you could use a Raspberry Pi 4, which features a quad-core ARM processor and supports up to 8GB of RAM.

Free yourself – Of course, this is more of a hacker's dream than anything else. Most people want a device that just works and works well, not some makeshift device that can't even access Instagram. But the Zero Terminal is a symbolic departure from what we've come to expect in terms of planned obsolescence and learned hopelessness. Our laptops slow to a crawl over time, and smartphones have so much complicated software on them nowadays it's nearly impossible to guarantee something isn't collecting data about you. Plus, eventually, phone makers simply stop supporting old hardware.

The Zero Terminal is a revolt against that world. The camera is no longer good enough? Connect a new one. Want to use an emulator to play NES games? Put it on a microSD card and slot it in. It's basically what Google tried but failed to accomplish with its Project Ara modular phone concept.

Other options — Fortunately for people who don't care about the do-it-yourself and modular aspect of the Zero Terminal, there already exist privacy-centric, Linux-based smartphones that offer much the same in terms of privacy but more power. The PinePhone is one such example – it's a full-featured smartphone that runs most major smartphone Linux projects and already includes all the radios and other sensors you'll want for the complete, contemporary smartphone experience. Thanks to built-in hardware switches you can also disable the antennas, microphone, and camera.

Still, the Zero Terminal is a cool project that could be a fun build for anyone interested in learning how to build their own little computer and become more independent in the event that the apocalypse arrives and regular smartphones suddenly become a whole lot less useful.