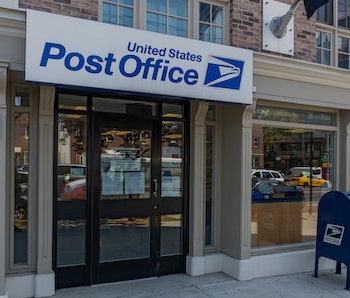 Even before President Trump's assertions that mail-in voting is inherently fraudulent (which it isn't) and his crony's attempts to withhold funding from the USPS in order to discourage absentee ballots, the postal service itself has been thinking about ways to enhance election integrity. The U.S. Patent and Trademark Office last week made public a patent filing by the USPS that describes a system for using blockchain technology to secure mail-in voting.

Under the proposed USPS system, every eligible voter would receive a code in the mail they could use to authenticate their identity online and place their vote. The basic idea is that since the blockchain acts as a distributed ledger maintained by multiple independent parties, your vote couldn't be changed after the fact, nor could multiple votes be recorded linked to your identity. At the same time, the system would be able to maintain anonymity.

The human problem — On its face the idea seems reasonable if you're trying to combat votes being tampered with after they've been submitted. But there are problems, namely what happens to protect integrity before your vote is submitted in the first place. States still have to verify the eligibility of each person voting and ensure that the same person isn't registered to vote across multiple states or counties, and that dead people aren't voting. The blockchain doesn't address that key concern regarding mail-in voting, and states actually already do cross-check their voter rolls with other counties to make sure only eligible citizens can vote.

Public confidence — Another issue with blockchain voting is that voters will want confidence that their vote is marked accurately in the system. With a paper ballot, you can see exactly what vote you've cast as you fill it in and, afterward, audits are conducted where all political parties play a role to verify that nothing in the submitted ballots looks fishy. If anyone were able to log onto a computer system to view the ledger and double-check their vote was tallied accurately, that could open up voting to coercion as a bad actor or mob-type character could force you to vote the way they wanted you to.

That's not to mention all the vulnerabilities researchers have identified in digital voting services that have already been tested in elections. Internet-connected software is incredibly vulnerable to attacks such as malware that can quietly alter your vote before you tap "submit." Back in 2018 it was found that the Voatz mobile voting app, used during the 2018 midterm elections in West Virginia, featured a number of weaknesses that made it possible to alter or stop an individual user's vote.

The blockchain is an exciting buzzword that could improve the digital voting systems we have today, but it doesn't address all the problems that require human legwork. And anyway, actual instances of mail-in voter fraud are exceedingly rare. Unfortunately, though, the President is trying to suggest otherwise. Whether it's pure malice or mathematical ignorance is unclear, though given his track record, it's likely a combination of both.