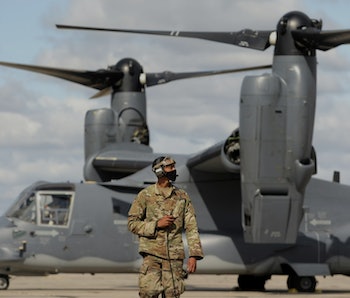 When it comes to technology, the military always seems to be a few steps ahead of the rest of us. The latest: a combination of a consumer smartwatch and fitness-tracking ring that, in conjunction with some algorithmic magic, can detect illness up to two days before symptoms present themselves. Yes, that includes COVID-19, according to Defense One, which first reported on the wearable combination.

While the solution can't actually predict someone has COVID-19, it can predict they're about to get sick, which could be enough for early testing. That alone could help limit the spread substantially, especially among groups who are often in close quarters.

The wearable set, which is currently being tested by about 5,000 military members, was created as part of a collaboration between the Defense Innovation Unit (DIU), the Defense Threat Reduction Agency (DTRA), and health tech conglomerate Philips. The smartwatch being used for the trial is made by Garmin, while the ring is made by Oura. Both are commercially available products.

The big project here, then, is the set of algorithms being used to detect illness. The system is known as Rapid Analysis of Threat Exposure (RATE) and is trained on a dataset of more than a quarter-million patient records. If the tests go well, RATE could change how we think about preventative medicine for everyone.

How does this even work? — RATE uses technology that’s already very easy to come by. Sure, that tech will run you a few hundred dollars combined, but it’s not all that fancy, really.

Using sensors that come in consumer-grade tech means the project will be infinitely more expandable if its algorithms find success. Researchers identified six markers using the tech’s built-in sensors that, together, provide users with a rating from 1 to 100 that a sick day is in their near future. Changes in metrics like resting heart rate can, in conjunction with other factors, serve as indicators that illness is imminent.

Not explicitly for COVID, but… — This project was already under development before the COVID-19 pandemic swept the world, but its creators are definitely interested in using it to curb the spread of the coronavirus.

“Originally, this wasn’t designed for COVID-19, but the algorithm was trained against some SARS variants, of which COVID-19 is one,” Christian Whitchurch of the DIU told Defense One.

Researchers know this kind of health data is sensitive. They’ve built the system to share data only with researchers — commanding officers aren’t given any access to individuals’ scores.

Right now the team says it doesn’t have plans to seek FDA approval or roll the algorithms out to civilians. Still, though, it’s easy to imagine a future where such algorithms can be used to fight the spread of a pandemic before it spreads quite as far as COVID-19 has — especially when combined with other technology like contact tracing.