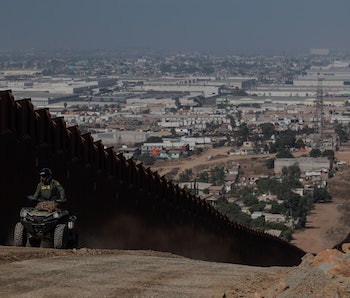 The Trump administration has awarded Palmer Luckey's Anduril Industries a five-year contract to erect hundreds of surveillance towers along the U.S.-Mexico border. The Sentry Tower, as it's called, uses an array of cameras and sensors in combination with AI software to spot objects moving along the landscape and inform border patrol.

Virtual walls have bipartisan support — Officials in U.S. Customs and Border Patrol have long called for this type of advanced, "virtual wall" over the traditional, physical border wall that President Trump is obsessed with. Physical walls are wildly expensive and ineffective, and in some areas of the border residents have been fighting aggressively to stop the government from seizing their land for construction.

Democrats have even supported the virtual wall idea for its significantly lower cost. Trump's border wall would cost at least $15 billion to construct but likely more, whereas Anduril's contract is estimated to be worth hundreds of millions and cover much of the border more effectively, especially in rugged mountainous areas where a wall is hard to build and agents cannot surveil as often. Audril's Sentry Towers are lightweight and border agents can set them up within two hours.

Support in the future might be nil — According to the Washington Post, CBP will erect 200 of Anduril's AI-powered towers along the U.S.-Mexico border by 2022. The towers feature solar panels at the base to keep them running 24/7, and a cluster of cameras, sensors, and antennae designed to spot anything moving along the landscape. Anduril's AI software then tries to identify objects and feed that information to law enforcement. The company claims it's designed its software so that it cannot recognize faces or collect any other personal information.

Palmer Luckey pivoted to border defense after Facebook reportedly pushed him from his job leading Oculus after it was learned he made a $10,000 donation to a pro-Trump group. In that light his second act really isn't surprising. And lucky for him, there's nothing the Trump administration likes to spend money on more than defense. It's not clear how much the contract from the government is worth, but it's estimated to be in the hundreds of millions of dollars.

Based on increased worries around the use of surveillance technology by law enforcement following the murder of George Floyd, it's unclear if a Democratic administration would have the appetite to invest further in Anduril's towers. Critics point to AI's frequent misidentification of people of color as reason to avoid the technology, saying it can intimidate people by making them too scared to protest or otherwise demonstrate their rights.

Meanwhile, Trump hasn't given up on his dreams of erecting a physical wall. His understanding of digital surveillance technology is, unsurprisingly, very rudimentary. From the Post story:

“They’d say, ‘No, no, we don’t need a wall. We can have airplanes flying above. We can have pic- — people taking pictures. We can have drones,’ ” Trump said last month during a trip to the border in Arizona to commemorate the completion of 200 linear miles of new steel barriers. “I say, what are you going to do? Take pictures of everyone flowing across?”