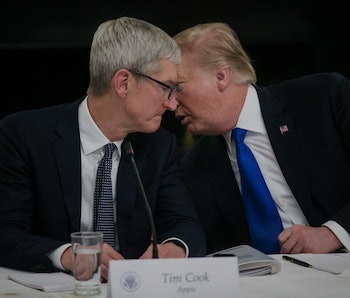 Last week, Apple announced it would begin online sales of its products in India this year for the first time ever. Now Tim Cook says that’s largely due to help that Apple received from the Trump administration.

India has quickly become one of the next big battlegrounds in big tech’s war for supremacy. As always, Apple is approaching from a strategic angle — using any and all of its connections to increase its hold on the worldwide market.

Apple has never made much headway in India — Before this year, Apple has always struggled with finding a foothold in India. A long-standing rule in the country forced Apple to partner with third-party sellers for both in-store and online sales. That’s made it very difficult for Apple to make headway; the company currently has less than a 3 percent market share in the country.

Trump has changed that forever — Cook said in a recent interview with Fox Business that the Trump administration has been lobbying for change to these policies in India.

“The administration has worked on this with the Indian government and that change has been made,” Cook said. He did not disclose details on the negotiations, though they most likely took place as part of President Trump’s visit to the country last week.

Apple is buddy-buddy with the Trump administration — Tim Cook has long kept President Trump in his back pocket in case of emergencies. The two attend dinner together often, and in November the pair made headlines when Trump went on an exclusive tour of Apple’s manufacturing plant in Austin, Texas. Cook’s friendship — for lack of a better word — with the Trump administration is rumored to help Apple with tax cuts and sly lobbying. Now it’s proving to come in handy on a global scale.

Already the Trump administration’s lobbying seems to be working for Apple. The company shipped nearly a million iPhones to India in the last quarter of 2019 — up 200 percent from the year prior, according to research firm Canalys. Those numbers will only increase as Apple opens online sales in India later this year and its first brick-and-mortar store in the company in 2021.