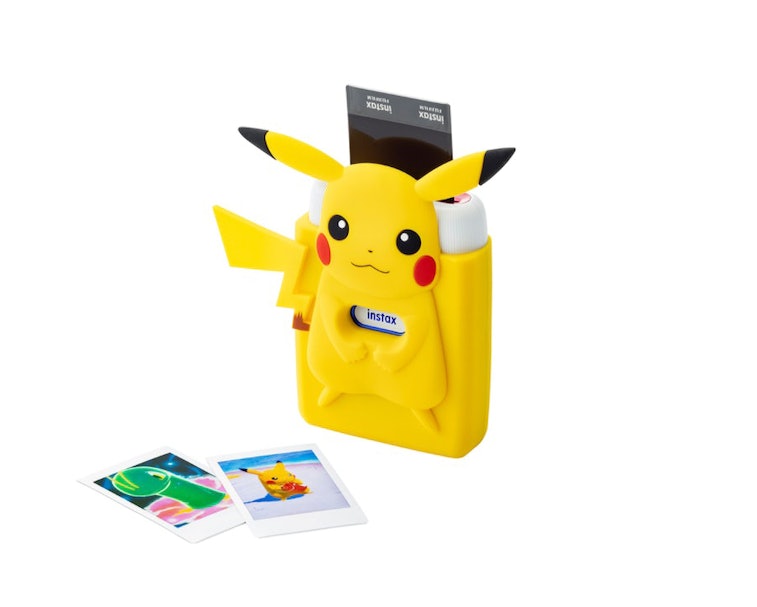 The release of the new Pokémon Snap is rapidly approaching, and Nintendo just managed to make us even more excited for its release. Fujifilm has partnered with the game developer to create a new Switch-themed Instax Mini Link printer — and there’s a bundle with an adorable silicone Pikachu sleeve, too.

The Mini Link is the same instant printer Instax already offers, albeit with a fresh coat of Nintendo-inspired paint. The palm-sized printer connects directly to your smartphone and spits out photos on Fujifilm’s Instax instant film paper.

We were already super pumped for New Pokémon Snap, which we’re sure is going to press all our nostalgia buttons in exactly the right way. Now you’re telling us we can actually print our snaps in analog form and display them alongside our photos of real life? Suddenly we’re feeling a little less jealous of Japan’s convenience store printouts. And a little more conflicted about whether to buy this or the similarly adorable Polaroid Go camera.

Printer, bundle, app — Today’s announcement has three parts: a special-edition Instax printer, a Pikachu bundle, and a new app for editing snaps and sending them to the Mini Link. The Mini Link printer itself is the least exciting part of the announcement — it’s just a normal Mini Link with red and blue accents to match the Switch’s classic colors. The printer body is also “Ash White,” which looks a lot like Just Plain White.

The Pikachu bundle is everything, though. Sliding the Mini Link into the yellow silicone case, complete with oversized ears and that classic zig-zag tail, transforms the experience entirely. At $120, the bundle with the Pikachu case is just $20 more than the printer alone. That’s a steal.

Fujifilm is also releasing a new dedicated smartphone app for printing screen captures taken on the Switch. The app appears to work much like Nintendo’s official app. All screenshots taken on your Switch automatically show up in the app’s gallery and you can then add filters, frames (there are Mario and Animal Crossing themes to go along with those for New Pokémon Snap), crop, and send your completed masterpiece right to the printer.

Use it for everything — This Instax-Nintendo partnership is geared mostly toward the release of New Pokémon Snap, and even that would be enough to have us hyped.

Even better, though, is that you can use the new app for printing any screenshots taken on your Switch, no matter the game. Feel like immortalizing your Monster Hunter: Rise armor set in analog form? Nothing’s stopping you from doing just that. Or perhaps your Animal Crossing island is finally aesthetically pleasing enough to be photo-worthy. Really, just go for it. Print everything.

Fujifilm says the new app will be available starting April 30, with support for all Mini Link printers, Switch-themed or otherwise. The special-edition printer and its Pikachu case will be available the same day.