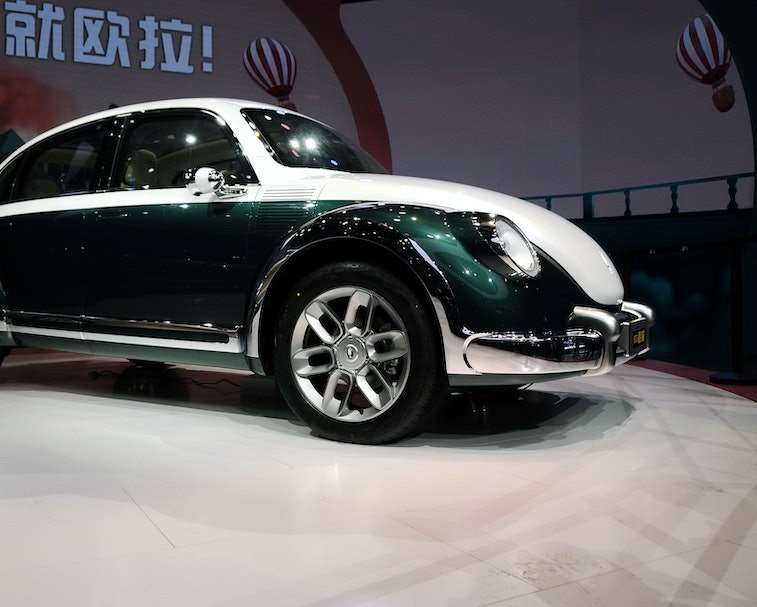 If Volkswagen doesn’t want to make an electric Beetle, it appears someone else will. At this week’s Shanghai Auto Show, Chinese automaker Great Wall Motors unveiled the Ora Punk Cat, a four-door electric car that has a striking resemblance to the VW Beetle, with its round headlights and iconic hood that takes up nearly a third of the car.

Volkswagen discontinued the Beetle in 2019. The German automaker plans on releasing an electric van inspired by the classic VW Bus sometime in 2024, but it’s made no moves to bring back the iconic bug. Perhaps the Ora Punk Cat will make it reconsider, especially if it proves successful in China.

Budget electrics — Ora is an electric sub-brand of Great Wall, and is known for making small battery-powered vehicles. Its first car, the Ora iQ, hit the market in 2018 as a compact crossover with a 46.57 kWh battery and an estimated range of 250 miles on a charge.

Copycat — Ora unveiled another car at the Shanghai Auto Show, the Lightning Cat, that looks almost identical to a Porsche sedan and is said to reach 62 mph in just 3.5 seconds. Needless to say, we doubt these were both a coincidence.

At least in the case of the Punk Cat, the aesthetics might be ripped off, but the design is original in one way: it has four doors. VW never sold an official four-door Beetle. But the hood, wheel arches, rear... heck pretty much every part adheres to the same lines as a Beetle. The interior, however, is far too loud for anything from VW. And dare we say, we love it (see below).

Unsurprisingly, Volkswagen has released a statement to Carscoops indicating that it’s aware of the Punk Cat and is weighing whether or not to take legal action. “We check this matter with regard to any violations of utility model or design rights of Volkswagen AG and reserve the right to take any necessary legal steps,” a spokesperson said.

We’d buy one — Ora’s take on the Beetle actually looks kind of cool. And many cars from different manufacturers look similar without anyone batting an eye. If VW doesn’t want to make a new electric Beetle, someone else should be allowed to. Chinese officials are known to ignore international IP disputes when it comes to sectors important to its economy, which electric vehicles are. Cheap prices for electric cars there have been fueled thanks in part to large subsidies by the government to help companies achieve mass production and make China a global leader in green energy.

It’s too bad Ora doesn’t sell to the North American market, but maybe if we’re lucky the car will show up on Alibaba. It would be far from the first electric car available for purchase there.