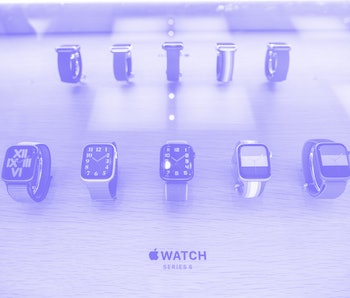 The seventh edition of the Apple Watch could look a great deal different than the design we’ve come to know and love. The redesign would include flat edges around the sides of the device, rather than the rounded ones currently in use, to match up with the rest of Apple’s current design scheme.

Respected Apple leaker Jon Prosser spoke at length on the Genius Bar podcast about where he expects Apple to take its smartwatch design this year. The rumor has been backed up by Ming-Chi Kuo — another prominent tech analyst — who says the new Apple Watch will have an “improved form factor design” (h/t iMore, via Apple Track).

The move to a flat-edge design would be logical for Apple’s overall 2021 aesthetic choices. The iPhone 12 reclaimed its flat edges to much critical acclaim; the newest version of the iMac has also shied away from rounded edges.

This year is shaping up to be absolutely major for the smartwatch market. Just yesterday Google unleashed massive plans to team up with Samsung and completely overhaul the Wear operating system. Competition breeds innovation, as they say. And it’s consumers who will come out on top.

It’s been a while — The Apple Watch of today, the Series 6, doesn’t look all that different from the original model that debuted in 2015. The only major design change has been focused on shifting the Watch’s dimensions; the screen now takes up more of the case, and it’s definitely sleeker than the first series Watch.

Six years is a pretty long time to sit on a full redesign, lending some credence to the idea that 2021 could finally bring an entirely new Watch to market.

Complete the look — Apple releases impressive technology year after year, pushing the boundaries of what we can accomplish with our smart devices. But the company is also nothing without its aesthetic sensibilities. This year Apple has been big into flat edges, letting that design choice rule its lineup. Why not throw in a new Apple Watch to match the rest of the Apple Store?

Apple will also need to bring hot new features to the Watch to convince users to upgrade. We’ve heard Apple is considering a blood sugar monitor in the Series 7, but Apple’s been pretty silent overall about where the Watch is going next. Ming-Chi Kuo has also said he expects Apple to add other health-focused features this year.

Elsewhere, we’ve seen some interesting rumors about a “rugged” Apple Watch being developed for those among us who actually go out into the world and brave the elements.