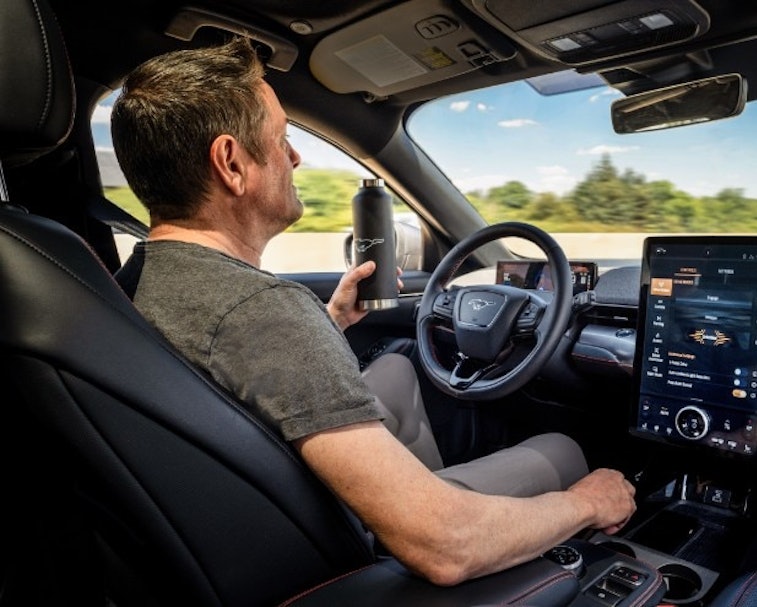 Ford will upgrade its all-electric Mustang Mach-E SUV with advanced options including “self-driving” technology, the company announced today. The new Active Drive Assist feature, which forms part of Ford's Co-Pilot360 2.0 system, utilizes a driver-facing camera to ensure the person operating the vehicle is paying attention to the road and will enable hands-free highway driving.

Hands-free driving is new to Ford’s vehicles, though the company has been teasing the feature’s arrival for years. Mach-E drivers will be able to optionally purchase the necessary hardware for the update when they buy the car, but the accompanying software update won’t actually be available until Q3 2021, and that will require a separate purchase.

When it comes to semi-autonomous features, every major carmaker is trying to catch up with Tesla's Autopilot feature. That much is clear from Ford’s press release, which includes a graphic that directly compares the Mach-E’s feature set to that of the Tesla Model Y. But it’s going to take more than a fancy selfie camera for Ford to match Tesla’s pace of innovation.

Hands-free, eventually — The biggest perk of the new Co-Pilot360 package is the new Hands-Free Mode, which, as the name suggests, allows the SUV to handle the majority of the driving for a period of time. At launch, the hands-free system can only operate on pre-mapped highways. Ford says it’s mapped 100,000 miles of divided highways across all 50 states (and Canada), but it’s not gone into more detail. We expect it'll cover most major interstates, though.

New Mach-E owners will need to wait until at least Q3 2021 — more than a year away — to use the feature, though. That’s a long time to wait for a feature that could roll into your driveway the moment you buy a new Tesla. Like a new Tesla, though, if you do spring for the feature you'll get it via an over-the-air software update.

Essentially, an infrared driver-facing camera tracks your gaze and your head position while the car takes over the job of steering. Ford promises the SUV will send you tons of intuitive alerts on the instrument cluster if you stop paying attention, and claims the system works with most sunglasses.

Included in Ford’s press release is a handy graphic comparing the Mach-E’s upgraded features to those of the Tesla Model Y. From a distance, it looks like the Mach-E is winning the feature game. However, as Electrek points out, Ford conveniently forgot to add those features the Model Y has that the Mach-E does not, such as AutoPilot’s ability to stop at signs and traffic lights.

Ford’s driver-facing cameras will be a significant safety upgrade for hands-free driving. But we won't actually get our hands-on (or off) it until late next year. That gives Tesla plenty of time to get even further ahead with its own feature updates.