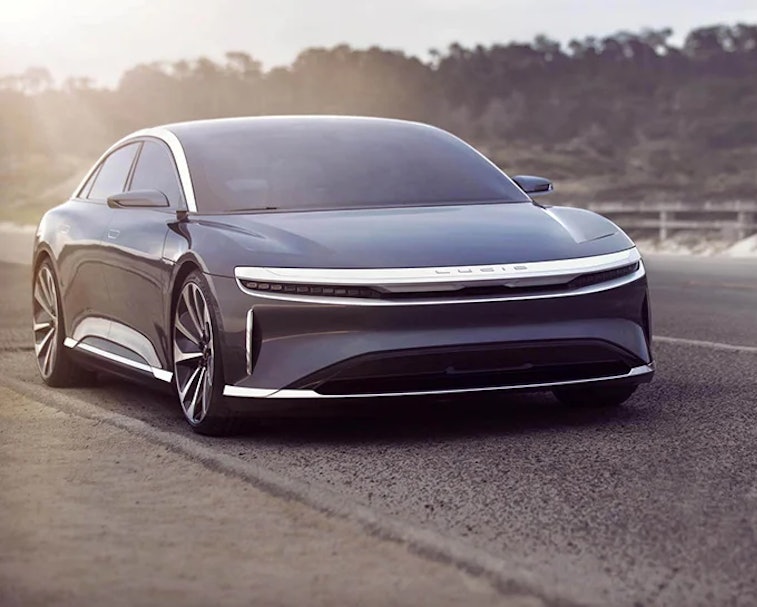 Lucid Motors says its first electric car, the Lucid Air, will be the fastest charging electric vehicle in the world when it debuts, reaching 300 miles of range in just 20 minutes. It's also supposed to have the longest range of any electric car at over 500 miles on a charge. Those are the sorts of bold numbers we normally expect out of the world's most valuable automaker, Tesla.

To achieve such rapid recharging, the Lucid Air uses a 900V system, a higher voltage than any used in other electric vehicle at present. Of course, none of that's going to come cheap. Lucid is marketing the Air as a "sustainable luxury" vehicle, and teasing the sort of executive-friendly rear cabin arrangement than tends to require a long wheelbase and a high price tag. With Tesla's Model S starting at $74,990 (and capable of 100 miles less to a charge) we expect Lucid's pricing will be in the same ballpark.

The production version of the Lucid Air is set to be unveiled online on September 9, and while a date hasn't been set for the first deliveries, we're expecting to see them in 2021.

Promises are easy — Lucid Motors has yet to sell any cars, let alone build them en masse, so it's not going to have the same economies of scale as other vehicle manufacturers, which is going to necessarily be a cost either absorbed by investors initially or passed on to consumers. Building cars is difficult and expensive. Even legacy carmakers have struggled to transition to electric models. Meanwhile, few other upstart electric car companies have been able to make it past the prototype phase due to the immense challenges involved.

Nonetheless, we remain optimistic. Not only because of Lucid's slick marketing materials, but because the EV market is changing. Tesla might be dominating the sector, ramping up production, and working on new battery tech. But it's lead isn't insurmountable, and with a heap of new EVs incoming and buyers increasingly amenable to electric-powered cars, there's room for newcomers if they can not only pull of the initial acrobatics, but also stick the landing.

Is this necessary? — Lucid might think that a large battery that can produce 500 miles of range is important, but in reality, 400 versus 500 miles really might not matter to many buyers. It could alleviate range anxiety, but realistically few people go on long journeys that often, and electric car chargers are easy to find nowadays.

More realistically the average driver will go 50 miles to and from work every day and be able to charge up at home overnight. Moreover, what's going to be more challenging for the company is rolling out the charging infrastructure necessary for its rapid charging promises to be a reality. One of Tesla's biggest advantages is its Supercharger network, and that can't be replicated overnight.

Cheaper makes us cheerful — While Lucid dukes it out with Tesla, Mercedes-Benz, BMW, Polestar, Cadillac, and company at the top end of the market, what we'd really like to see, and what could really upend the industry is a range of affordable compact EVs. Those will likely follow once battery tech gets cheap enough, but for now, we'll just have to ogle the luxury vehicles and dream.