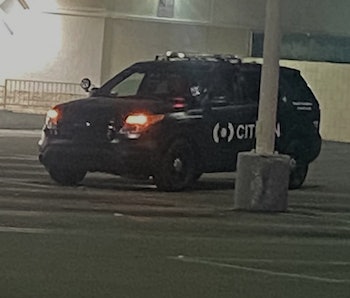 Citizen, a neighborhood watch and crime alert app, has begun testing “on-demand” private security vehicles in Los Angeles. VICE reported on the initiative, which was later confirmed by Citizen as a “pilot program” without adding further detail.

At first glance, the cars look very much like police squad vehicles, but on closer inspection, the side is branded with a large Citizen logo.

Launched in 2017 under the name Vigilante (a bad sign to start with), Citizen bills itself has a “personal safety network.” The company has raised more than $133 million and expanded from New York City to more than twenty cities across the United States. The app relies on radio antennas to monitor 911 communications, sending out alerts to users who can read updates about ongoing incidents as well as share video from the scene, and even broadcast live audio discussions about an incident.

Violent gentrifiers — That last feature, called OnAir, has made Citizen the subject of understandable controversy, as critics say the app is encouraging untrained civilians to engage in mob justice.

That concern isn’t hypothetical either. Just a few days ago, Citizen was forced to apologize after it sparked a manhunt for a wrongly identified suspect in an L.A.-area fire.

The company offered a $30,000 reward to anyone who caught the suspect, but leads were narrowed down by users of the Citizen app itself, who hosted an OnAir broadcast — basically Clubhouse for crimefighting — in which they repeated unsubstantiated tips as fact. The Los Angeles Police Department provided Citizen with a photo of the suspect, but from there users extrapolated, using amateur investigative work to decide where to look for the suspect.

The incident highlights the problem with Citizen, Nextdoor, and other apps like them. The apps empower untrained individuals to act as law enforcement, bringing all their biases and prejudices with them. And now Citizen wants to use that information to send out private security to harass and intimidate.

It’s not hard to see how this could lead to further gentrification as residents push “others” out of their neighborhoods. Just look at the frequent incidents of white residents telling Blacks they’re in the wrong neighborhood. There’s no accountability either — anyone can join in on these discussions and spread misinformation that could lead to violent confrontations with police or other civilians.

Mistakes will be made — Citizen says it has “strict validation protocols” in place for OnAir broadcasts but, of course, made a mistake in allowing the freewheeling discussion about the alleged arson suspect to take place.

The new on-demand security service could help law enforcement address a lack of department resources — and it’s probably how Citizen plans to make money — but it’s a really, really bad idea. Just think about police abuses today, but replace the police with glorified mall cops working on amateur leads who have even less accountability.