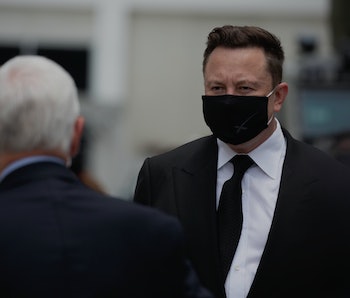 Tesla released its 2019 Impact Report this week, which trumpets the benefits its business has on the environment. Among other things, it touts Tesla's work making batteries that degrade slower than those from the competition, and says that the company has installed more than 3.7 gigawatts of solar capacity through its SolarCity division. All well and good.

What the report doesn't note, however, and that Gizmodo aptly points out, is that these gains are coming at a cost that's conveniently omitted from the report. Tesla CEO Elon Musk famously defied orders to keep his factories closed in order to prevent the spread of coronavirus. And surprise surprise, his workers who were forced back to the plant have been contracting COVID-19. Tesla's report doesn't seem to account for this negative externality, or a detrimental side effect that the company doesn't have to pay for.

Nobody should have been surprised by this. Experts have said it's nearly impossible to socially distance workers in an auto factory, and we've already seen legions of workers at meat plants contracting COVID-19 in droves. But Musk called the closures fascist despite all the evidence that they were anything but.

Money heals all wounds — Instead it's the rest of us who pay for Tesla's workers when they get sick in the form of resources that didn't need to be used if Tesla had just followed the rules. But the United States is a capitalistic society that doesn't want to hurt business, and rarely if ever are billionaire CEOs punished for their actions in any significant way. Tesla has historically had much higher rates of injury in its factories than other car manufacturers, but OSHA was only able to fine the company a pitiful $400 for its failure to accurately report injuries. Tesla can make more money simply by ignoring the law and paying a small penalty later.

Sure, what Tesla and Elon Musk have accomplished is admirable. Nobody is denying that a future of renewable energy and electric cars will be better than the status quo. But it's not a zero-sum game and workers don't need to be abused to reach this goal. Yet Musk's legions of fans defend him for seemingly any valid criticism.

The irony — If Musk really wants to create the sustainable future he always speaks off he can't ignore his workers. It's ironic, really, to say your goal is to save the Earth for future generations and simultaneously threaten the lives of the most vulnerable people in the process — people who can't afford luxuries like an electric car and who will be the last ones to get into the life rafts when global warming wreaks havoc.