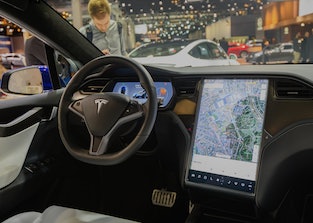 The number of Tesla Model S and Model X vehicles the NHTSA has flagged for recall.

One concern that has surrounded Tesla over the years is its touchscreen computers, which replace physical buttons for almost all controls, and which could be prone to failure. Computers slow down as storage capacity is exhausted, and lo and behold, widespread reports have indicated that Tesla vehicles that are several years old may exhibit touchscreen problems.

The issue has become concerning enough that the National Highway Traffic Safety Administration (NHTSA) is now asking Tesla to recall 158,000 vehicles manufactured between 2012 and 2018. It began probing the issue in June 2020.

Failure of the touchscreens can pose a threat to motor-vehicle safety, according to a letter from the NHTSA, because the computers in Tesla vehicles control a variety of critical functions including the rear-view camera and window defrosting.

A tablet in your car? What could go wrong — Tesla vehicles covered by the recall request include Model S vehicles built between 2012 and 2018 as well as Model X SUVs made from 2016 to 2018. Their computers are essentially Android tablets — they run on Linux and use Nvidia Tegra 3 mobile processors with built-in flash memory. According to the NHTSA, the computers are designed in such a way that they use a little bit of that memory each time the vehicle is started. Once capacity is reached, the computer fails.

Tesla is still a quite new automotive company, relatively speaking. Compared to Ford, which is almost 120 years old, it's a toddler. Considering that it's been ramping up production quickly in recent years, most Tesla vehicles on the road today are likely still very new. Which means we haven't had much time to see whether or not they're really built to last. The failure of critical functions only several years after production is concerning.

Yes, but — In Tesla's defense, electric vehicles generally require less maintenance over the years than internal combustion engine cars do. There are fewer fluids — like engine oil — and fewer filters, and battery motors just don't have as many moving parts as gas engines. Tesla charges to replace the computers if a vehicle is out of warranty, but owners could still save money over the long run when accounting for the savings on consumables.

The nature of Teslas being powered by software also means they can be regularly updated with fixes and new enhancements long after they roll off the production line. New features added to existing cars include useful ones like Smart Summon, an autonomous parking feature that enables a Tesla to leave its parking space and navigate to its owner. And then there are the cute Easter eggs, like the ability to play fart noises through the cars' external speakers.