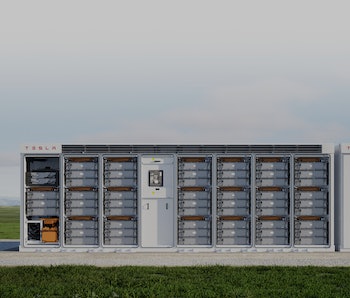 Four Megapacks, Tesla’s giant battery setups, have been delivered to a new bitcoin mining facility in Texas, a collaboration between Jack Dorsey’s Block, Elon Musk’s Tesla, and Adam Back’s Blockstream. The facility is meant to be an example of how creating cryptocurrency can be an entirely sustainable process.

News of the facility’s setup has been slow since its announcement last month. All we’ve really seen is a picture of the four tightly wrapped Megapacks with two wind turbines doing their thing in the distance.

The arrival of Tesla’s Megapacks is the first real sign we’ve seen that the project does actually exist and is moving forward as planned. (Thanks to Electrek for spotting it.) The Megapacks are an integral part of the facility’s goal of complete sustainability — a reminder that making crypto-mining green is not a process that will come cheap.

Big boy batteries — Tesla is providing the vast majority of the technology that will power the collaborative mining rig. A Tesla-made 3.8-megawatt solar PV array will collect much of the facility’s power, while the Megapacks in question will store that power until it’s ready to be doled out.

Megapacks are one of Tesla’s lesser-known offerings, mostly because they’re still not ready for general public use. So far they’ve been used for just a handful of sustainability projects. The company deployed 37 Megapack units to Alaska’s Kenai Peninsula, for example, in the hope that they’ll alleviate dangerous power outages in the freezing climate.

Megapacks are made for big projects like this bitcoin facility, and they come with a price tag to match. Ordering four Megapack units — which would provide approximately 5.2MW of power — costs about $6 million right now, plus taxes and thousands in annual maintenance fees.

A unicorn or a beginning? — Sustainability has been a major caveat in the burgeoning cryptocurrency movement for a while now, but manageable solutions to this problem have yet to really present themselves. Other than buying up carbon offsets, that is, the efficacy of which is very much debatable.

Tesla’s own stance on cryptocurrency shifted rapidly last year, with Musk going back on his promise to accept bitcoin for Tesla products due to environmental concerns. “Tesla has suspended vehicle purchases using Bitcoin,” the company said last May. “We are concerned about rapidly increasing use of fossil fuels for Bitcoin mining and transactions, especially coal, which has the worst emissions of any fuel.”

If all goes well, this collaborative facility could prove it’s possible to mine bitcoin at scale without contributing massively to the death of the planet. Doing so will be ludicrously expensive, though, only made possible with technology the vast majority of the world doesn’t have access to. A sustainable project, yes, but perhaps one that isn’t sustainable as a solution to bitcoin’s much larger problems.