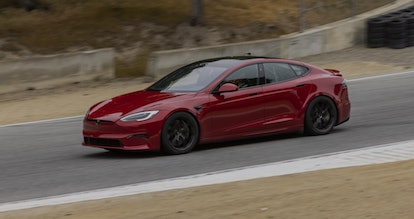 While Elon Musk has been flip-flopping his opinions on bitcoin and lying about Tesla’s self-driving capabilities, his car company has been hard at work preparing for the release of its newest vehicle, the Model S Plaid. The $130,000 electric sedan finally shipped to its first 25 owners this week, about three months after the company originally said they would roll off the production facility.

The Model S Plaid is essentially a souped-up version of the classic Model S consumers see driving streets around the world. The sedan can travel up to 390 miles on a single charge and Tesla says it’ll go from 0 to 60 mph in a fraction under two seconds. Tesla’s calling it the “quickest production vehicle ever made.”

Musk hosted a delivery event for the Plaid last night, livestreamed on Tesla’s YouTube channel. In typical Musk fashion, he drove one of the new cars on stage and pumped both fists in the air, looking very excited about the launch.

Electric and speedy — Tesla hasn’t done such a comprehensive upgrade to the Model S in nearly a decade. There are a few reasons Musk finally decided to go for it — with speed being first and foremost in his mind.

“We’ve got to show that an electric car is the best car, hands down,” he said at the Plaid launch event. “It’s got to be clear sustainable energy cars can be the fastest cars, the safest cars, can be the most kick-ass cars in every way.”

More infotainment — One of the Plaid’s big upgrades is in its infotainment system. The new 17-inch horizontal touchscreen is much closer in size to that of those found in Tesla’s Model Y and Model 3 vehicles. There’s also a new screen behind the center console for backseat passengers.

The processing power of the infotainment system has also received a boost in the Plaid. Musk says it’s like a “home theater experience.” The extra processing power means it can even play AAA games — Musk briefly showed the console playing the resource-heavy Cyberpunk 2077 at the event.

And a…yoke? — Perhaps most striking about the interior of the Plaid is actually its steering wheel, which adopts the yoke design used in some racing vehicles. The National Highway Traffic Safety Administration isn’t 100 percent sure this design is safe. That’s maybe something Tesla should’ve looked into before going ahead with production.

Musk says Tesla is planning to deliver several hundred Model S Plaids per week “soon,” with production ramping up to about 1,000 per week this year. The company is also planning to launch a less-fast-but-still-updated Model S later this year at a starting price of $80,000.