Tesla caves to demands and will recall cars with failing displays 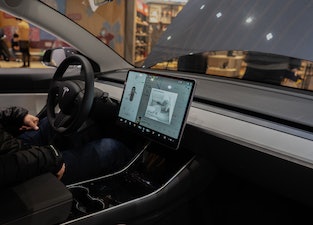 Roughly how many Model S and Model X cars are being recalled.

Tesla will recall more than 134,000 Model S sedans and Model X SUVs made between 2012-2018 over a design flaw that causes the touchscreen computer to "inevitably" fail. The move follows pressure from the National Highway Safety Administration (NHTSA), which last year began investigating reports that Tesla vehicles were exhibiting problems with the touchscreen display, which replaces many hardware controls.

Despite the announcement, the electric automaker's stock is up three percent today, suggesting that the market isn't too worried. Newer models, like the updated Model S and Model X, are said to feature a computer that shouldn't experience the issue.

Growing pains — In a recall request issued last month, the NHTSA said the failing touchscreen problem relates to the 8GB eMMC NAND flash memory device found in affected vehicles. A little bit of that memory is used each time the car is powered on, until it finally wears out and bricks the computer entirely. Losing function of the center touchscreen affects access to controls including window defrosting and the backup cameras.

At the time, the NHTSA said touchscreen failure could increase the risk of crash, though Tesla disputed that, saying that the driver could "perform a shoulder check and use the mirrors." It added, "If the screen is not visible to control the climate control and defroster settings, the driver will be able to manually clear the windshield." That seems less than ideal.

Tesla says that with a recent software update, access to the backup camera, turn signal, and a base setting for windshield defrosting and defogging will still be accessible even if the chip fails. The software-based nature of Tesla's cars is a positive because such fixes can be delivered over the air, and altogether new features can make a vehicle feel fresh even years after it rolls off the production line.

Regulators = good — Tesla initially did not want to recall any cars, demanding customers pay for a replacement computer. That's scummy but not unusual for the car industry — recalls are expensive and automakers often drag their feet. Tesla's vehicles have been notorious for their quality issues, however.

Thankfully the NHTSA confirmed on February 1 that Tesla has caved and will begin a recall starting on March 30, covering approximately 134,591 vehicles.

The automaker plans on upgrading an affected vehicle's eMMC chip free of charge, to an "enhanced 64GB eMMC," and otherwise refunding customers who already paid for a fix. Tesla is asking customers to not try and schedule a service appointment for a replacement unless their vehicle's display fails. It will reach out to customers directly as appointments become available.

Tesla CEO Elon Musk has long derided regulators on the whole. In 2018, he was sued by the Securities and Exchange Commission for tweeting Tesla had received an attractive buyout offer, a false claim that trigged investor excitement and forced the stock higher. Following a $20 million settlement, he said in an interview that he has "no respect for the SEC." Last year he ignored coronavirus safety measures in California by forcing workers back to Tesla's Fremont factory, flagrantly violating local orders meant to protect workers.

Today's announcement shows how Tesla wouldn't do the right thing until the NHTSA stepped in. A good reminder of the role regulators play: to protect people, not profits.