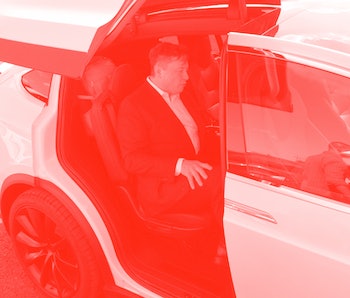 Tesla and CEO Elon Musk are being sued by a shareholder over “erratic” tweets posted by Musk that he says violate a 2018 settlement with the Securities and Exchange Commission (SEC).

At the time, the SEC filed a lawsuit against Tesla after Musk tweeted that he had secured funding to take Tesla private at $420 per share, which resulted in the company’s price skyrocketing. It was later learned that funding had not, in fact, been secured to take Tesla off the public markets. As part of its settlement, the electric automaker agreed to put in place procedures to pre-approve any tweets sent by Musk that might affect the company’s share price. Musk also stepped down from the board of directors.

Yes men — According to the new lawsuit, filed by shareholder Chase Garrity, Tesla’s board has “consistently failed” to appoint a general counsel that keeps Musk in line.

The general counsel is supposed to direct the company’s legal team and give advice on Tesla’s best interests. But Musk, he says, has been allowed to appoint members who are close to him and do not feel they can push back against his wishes. Musk’s replacement on the board of directors was Robyn Deholm, an Australian telecoms executive who has “failed to curtail Musk’s wrongful conduct.”

The CEOs tweets have cost Tesla “billions of dollars in market capitalization,” Garrity says. One such tweet cited in the suit is one from May of this year when Musk said, “Tesla stock is too high imo.” The share price fell 10 percent after the tweet was sent, affecting the real wealth of his investors, including loyal acolytes. Meanwhile Musk himself recently received more than $700 million in vested stock options thanks to Tesla’s performance.

Lackluster action — Three general counsels left in 2019, according to Garrity. One of them resigned only three months into the job after Musk tweeted "Tesla made 0 cars in 2011, but will make around 500k in 2019.” He had to correct the statement later to reflect that Tesla would hit an average production rate of 500,000 by the end of 2019, but actually produce more like 400,000 for the year. The initial tweet had not been pre-approved.

Tesla’s stock price has skyrocketed during the pandemic, up to $650 per share in 2020 — more than the $420 price that Musk once dreamed of. He’s also now the third wealthiest person in the world thanks to Tesla’s improving bottom line and excitement in EVs. It might be difficult to prove that the company would be worth more today if it weren’t for the tweets, considering the astronomical value it’s at today. But the company could still face penalties if it’s found that Musk has been able to tweet about Tesla without pre-approval.