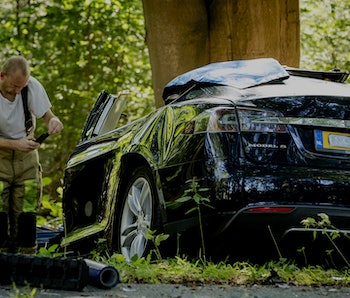 Tesla wants your car to drive you around — but it’s looking like its vehicles might be taking unintended amounts of control. The U.S. Department of Transportation is investigating reports of Tesla vehicles accelerating on their own, according to a report from CNBC. And Tesla has responded with a strong denial that blames short-sellers for the complaints.

“This petition is completely false and was brought by a Tesla short-seller. We investigate every single incident where the driver alleges to us that their vehicle accelerated contrary to their input, and in every case where we had the vehicle’s data, we confirmed that the car operated as designed,” the company stated Monday. “In other words, the car accelerates if, and only if, the driver told it to do so, and it slows or stops when the driver applies the brake.”

While the precise scope of the investigations isn’t yet clear, the initial petition includes 127 complaints filed by either Tesla owners or others on their behalf. The complaints allege that this issue may have caused 52 injuries and 110 crashes.

Tesla blames an old enemy: short-sellers — Tesla has a long history of battling with short-sellers. Tesla CEO Elon Musk has in the past stated he believes short sellers are “desperately pushing a narrative that will possibly result in Tesla’s destruction.” In its statement about the issue, Tesla brushes the problem off as yet another attempt by short-sellers to trash the Tesla brand.

Tesla’s ongoing war with short-sellers could be an easy scapegoat for a potentially disastrous PR situation. The sheer number of complaints filed about this issue makes it seem like a serious issue. For its part, the company says it has always been completely transparent with the U.S. Department of Transportation.

Customers claim Tesla hasn’t been on top of this — Some Tesla owners report that after bringing the issue to the company’s attention, Tesla hasn’t been very accommodating. One of the petitioners, Jennifer Terry, reported that her 2019 Tesla Model 3 accelerated suddenly and without prompting, and the company refused an immediate service appointment. Instead Tesla scheduled her for service a few weeks out. In the weeks while she waited for her appointment, Terry experienced the issue again — and this time it caused a four-car crash that injured two people. She also says her airbags didn’t deploy.

Tesla could be staring down a massive investigation — The NHTSA says that the allegations cover a broad range of Tesla vehicles. We’re talking the Model 3, the Model S, and the Model X produced between 2013 and 2019. That could cover more than 500,000 Tesla vehicles.

Right now the petition is in preliminary evaluation stages. But if the NHTSA decides the issue is serious enough, Tesla could be looking at a mandated vehicle recall. A recall of this magnitude would be an enormous resource-suck for Tesla.