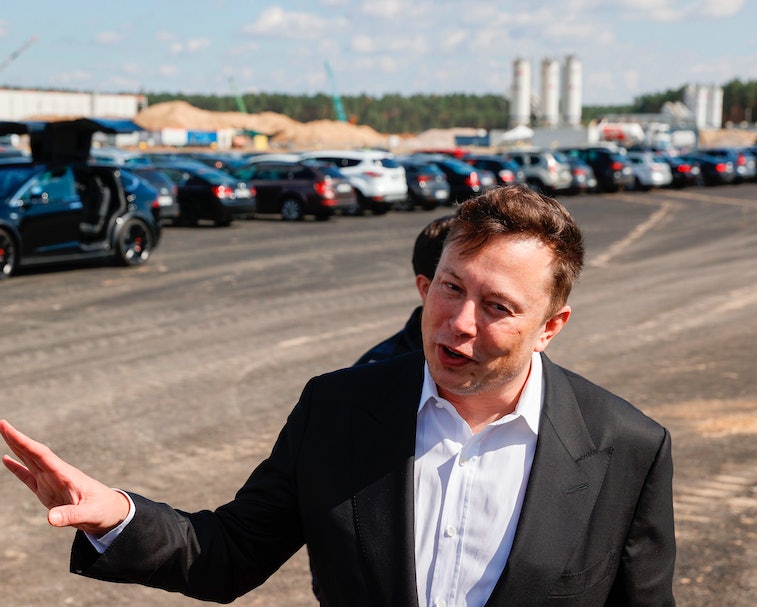 Tesla plans to overhaul the way it builds its cars, CEO Elon Musk told bystanders during a visit to the location of the company's new Gigafactory near Berlin, Germany. Tesla's stock has risen 500 percent this year and the carmaker intends to sell $5 billion in stock amid the rally.

In a video of Musk's comments, it sounds a lot like he's taking a victory lap for his recent successes, bouncing between signing autographs and at one point talking about building a nightclub on the roof of the new factory.

New Model Y — According to Musk, besides tweaking the manufacturing process of its cars, Tesla will build a new version of the Model Y at the Berlin plant. “It will be the first time that there will be a transformation in the core structural design of the vehicle," Musk said in the video. "It’s quite a big thing. Both manufacturing, engineering and design as well."

Deliveries of the Model Y crossover SUV began in March, and some customers have reported quality control issues like misaligned doors and loose seats. Tesla has dealt with many engineering hiccups, evident in the fact that it will make a maximum of 500,000 cars this year. For context, Ford sold about 5.4 million cars worldwide last year. Typically, defects only appear after many cars roll off the line — a higher proportion of Tesla's cars, then, have defects.

The company experienced headaches trying to get the Model 3 out the door after the company tried and failed to automate its factory in Fremont, California. The quality of its cars has improved, however.

Tesla recently acquired a license that allows it to sell electricity across Europe, which has long been a hope of Musk. Using idle Tesla cars and Powerwall batteries to send energy back to the grid could help lower the overall price of the cars for customers by saving them money on their energy bills. Musk said Tesla will build some battery cells and packs at the Berlin factory.

The Tesla founder has long said he wants to support a sustainable future not only by building electric cars, but also by advancing the transition to an energy grid powered by renewable sources of energy. Critics of electric cars often point to the fact that since power grids around the world still rely on fossil fuels, Tesla cars are in effect reliant on them. It's admittedly a lazy argument because Teslas can be powered by electricity generated by wind or solar, whereas combustion engine cars need dirty fuel extracted from Earth.

Rave cave — Musk didn't elaborate much on any of the announced plans, like the manufacturing process overhaul, and jumped between various subjects. At one point he says "Deutschland Rocks" and praises the availability of talent in the country. He also reiterated the idea that there will be a "rave cave" (it's exactly what it sounds like) on the roof, and that will make it a "real fun place to work." Berlin is notorious for its nightclub scene, so we guess it would make sense — if it doesn't create any HR issues, of course.

“I think a rave cave is culturally necessary," Musk said.