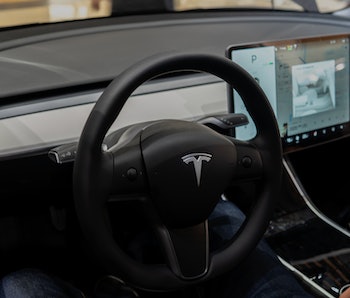 Tesla, the pioneer in updating cars as frequently as a smartphone, has released a firmware update for select models that brings a much-needed update: fart sounds. The new "Boombox" feature enables Tesla vehicles with external speakers to play custom horn sounds ranging from farts to animal sounds and music.

Tesla Easter eggs — On Twitter, CEO Elon Musk said owners can play a range of preset sounds through the horn. Custom sounds can be uploaded from a USB drive, so the possibilities are limitless.

As the name implies, Boombox also allows the car to act as a speaker — when you're not driving, whatever music is playing inside the vehicle can also play through the external speaker.

Tesla often uses software updates as an opportunity to add Easter eggs and gags to its cars. There's a dance mode, for instance, that opens the doors and flashes the vehicle's lights to the beat of the Trans Siberian Orchestra. Teslas can even play a range of games like Centipede and Missile Command, some of which are controlled using the steering wheel. None of these are exactly important features, but they help endear owners to the brand and help it stand apart as legacy automakers start getting more serious about electric offerings.

Not so fast — You need not worry though, as all these features require the car to be parked for them to work. In the case of the custom honks, it's hard to imagine that replacing the stock horn noise with somebody ripping ass would be very safe in an emergency situation. People need to recognize a horn as one that is commonly associated with danger (or, in the case of drivers in New York or Los Angeles, the light having turned green half a millisecond ago).

Blasting out a fart noise for all your neighbors to hear could still be funny. Or obnoxious. Mostly obnoxious. But Musk doesn't care much about that. Which comes as no surprise.

The update also brings some UI changes that move the position of certain buttons and the visualization of road details in the navigation system.