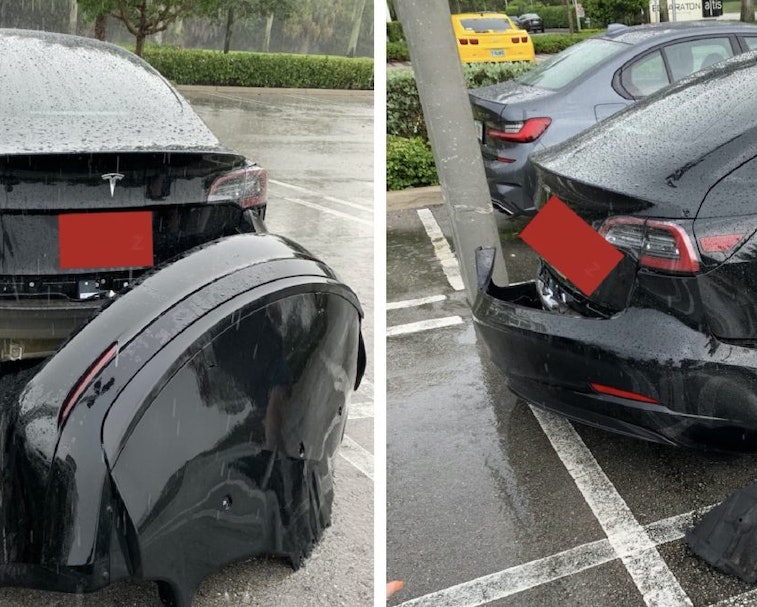 Another day, another problem with Tesla's cars. Electrek has obtained a service bulletin from the automaker confirming that Model 3 vehicles built up to May 2019 have a flaw that causes the rear bumper to fall off when the vehicle is driven through puddles of water.

"In rare instances, certain components on Model 3 vehicles built at the Fremont Factory before May 21, 2019, might be damaged when driving through standing water on a road or highway with poor drainage or pooling water," the note says. "In these rare instances, the rear fascia might detach from the vehicle."

One body shop owner reported that the issue may be caused by sand and water getting stuck in the underbody of the Model 3, putting pressure on the rear bumper.

Seriously, wtf? — That seems like a pretty dangerous flaw considering that any vehicle following behind the Model 3 could be put at risk should the rear bumper fall off unexpectedly. Tesla took more than two years to acknowledge the problem at all, though it now says the flaw is addressed in cars built after May 2019, and that repairs for the issue in older models are covered under warranty.

But seriously, imagine for a second a bumper falling off and hitting a pedestrian at full speed. It's surprising that Tesla isn't simply recalling these older vehicles to make sure they get fixed.

Trending in the wrong direction — This new information comes shortly after Tesla cut its warranty for used cars to just one year. And it also eliminated its 7-day "no questions asked" return policy.

Tesla fans have given the automaker a lot of leeway over imperfections thanks to its traditionally generous customer service, but also because the company has been so far ahead of any competition in developing innovative electric cars. But as other manufacturers begin to roll out competitive electric vehicles, Tesla risks exhausting its pool of loyalists who will forgive problems like these.

The company's most recent car, the Model Y crossover, has also been rolled off the line with lots of quality control problems, from questionable finishing to misaligned doors. One customer's vehicle had its sunroof completely fly off while on a highway. Perhaps now that it's the most valuable automaker on earth it's time the company spend more time on quality control and less on rushing products to market.