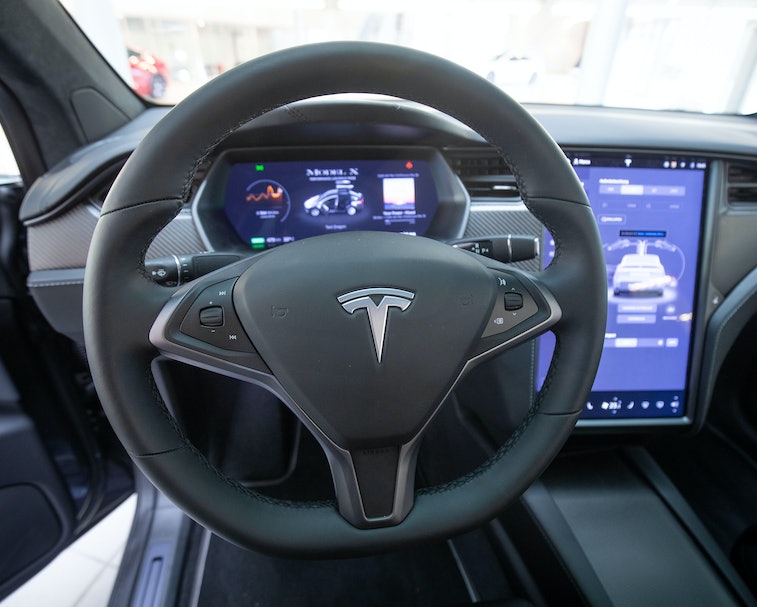 Tesla’s Autopilot driver-assistance software made headlines again last week after two men died when the Model S they were riding in crashed into a tree — and nobody was in the driver’s seat.

It was just the latest example of Tesla owners brazenly testing the limits of the driver assistance feature. Or maybe it wasn’t. Elon Musk was quick to tweet that an early investigation found Autopilot was not enabled when the crash occurred. And defenders of Tesla say that Autopilot wouldn’t work without a driver anyway because it includes a built-in safety feature that requires a driver’s hands remain on the steering wheel at all times.

But a dirty little secret among Tesla owners is that it’s incredibly easy to defeat Autopilot’s safety features. There are even accessories on Amazon that are not-so-subtly designed to do exactly that.

Hacks — Weights like this one rest on the steering wheel of a Tesla and are marketed to “release pain from shoulder” while the car is in the Autopilot mode, by allowing a driver’s hands to be free. Ergo, it lets you take your hands off the wheel, something Tesla explicitly prohibits.

The National Highway Transportation Safety Agency (NHTSA) recently opened two dozen investigations into Tesla crashes that may have involved Autopilot. Senate Democrats now want the NHTSA to launch a complete investigation into this most recent crash. Tesla has been criticized for rolling out Autopilot before it’s ready, but the NHTSA does not approve new driver technologies or have any regulations in place governing self-driving tech.

More checks and measures needed — Another Autopilot safety feature requires that the driver seat’s seatbelt be buckled. But Consumer Reports tested whether or not this measure could also be defeated, and was easily able to get Autopilot driving without anyone in the driver’s seat by placing a weighted chain on the steering wheel and threading the seatbelt behind the driver’s seat.

Ultimately automakers can only do so much to reign in reckless behavior. But Tesla knows how some of its drivers are abusing Autopilot, and it could at least take other steps to mitigate any risk to other people on the road. Other major carmakers implement “nanny protections” to prevent liability, such as disabling the use of the media console when a car is driving. Consumer Reports suggests Tesla could monitor weight sensors built into the driver’s seat, for instance, or install a camera that faces the driver and recognizes when nobody is there. Ford is doing just that in its new all-electric Mustang Mach-E.