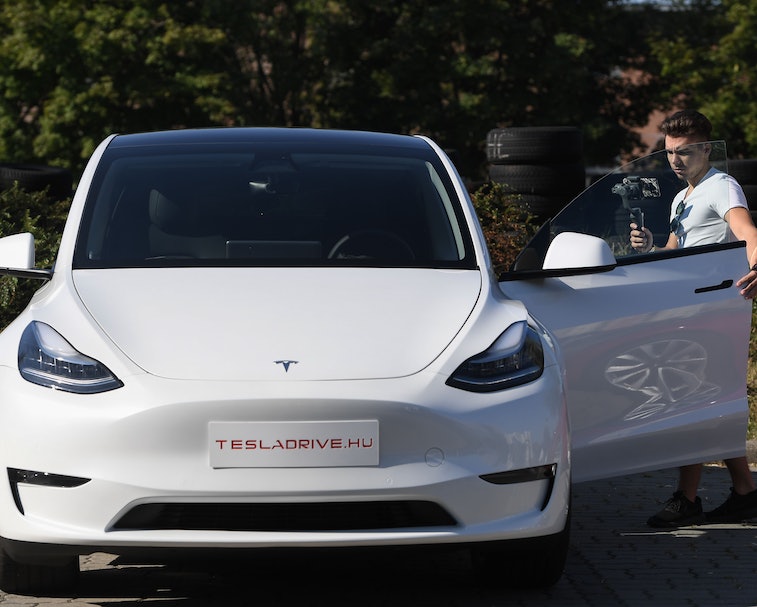 Tesla's Model Y doesn't just have wood trim in the interior. Some owners have reported that under the hood, a large chunk of metal in the internal cooling system is secured into place using a small strap and pieces of faux wood trim you'd expect to find at a home improvement store, rather than specially fabricated parts. The Model Y is Tesla's new crossover SUV that it began delivering to customers in March.

QA issues — Tesla is already facing complaints from some owners of the Model Y over quality control issues, including large gaps between panels that even drove one buyer to fix his car on his own. It's not unheard of for the electric automaker's early production cars to have quality control failings, but it's worrying to some that Tesla is willing to deliver them to customers considering the premium prices on its vehicles.

The piece of metal being held in place with faux wood in the Model Y is its Liquid Cooled Condenser, which takes in refrigerant and transfers its cooling properties through the car. Multiple owners have reported seeing the LCC held in place using a similar construction to the one below in their own vehicles. The strap is intended to relieve stress on the condenser during vibration and the belief is that the pieces of wood trim are there to prevent sharp metal corners from severing the strap.

Slapdash builds — It's totally possible that Tesla felt this build was sufficient to fulfill its needs. If it works, what's the problem? But other Model Ys seen on video appear to have plastic parts in place of the wood trim, making it look as though the trim was a hack job to fix some issue supplying the plastic.

Tesla frequently overcomes bottlenecks with DIY fixes, so it wouldn't be surprising if that's the case here. When it didn't have enough factory space to produce the Model 3, it quickly set up another production line outside in its parking lot. The company regularly discontinues certain models of its cars in order to reduce manufacturing complexity.

Tesla fans will say that quality control issues have long been a known issue, but that doesn't make it acceptable. The Model Y has a base price of $55,000 — anyone putting down that type of money isn't going to want a car thrown together in a slapdash manner with duct tape and plywood. It's still a good car, but add this discovery to the aforementioned existing defects on the Model Y and it starts to look like the build quality on the pricey SUV just isn't good.

Consider also that Tesla is a relatively young company, and we're starting to see the touchscreens on older Model S cars fail after only 3-5 years. The touchscreen replaces many hardware buttons in the Model Y, making it crucial to the car's operation. A quick fix job on the internals doesn't inspire confidence.

Elon ain't worried — Despite all this, Tesla is now the most valuable automaker in the world. Even more valuable than Toyota with its sterling reputation for quality and 10 million more cars sold than Tesla in 2019. The electric automaker is down slightly in trading in recent days but still up over 340 percent this year with a market cap of $346 billion. It might sell 500,000 cars this year.

But the price now is all about hype and expected sales in the future, optimists will say. And Tesla still has many levers it can pull to keep the stock price rising, like its expected release of a compact car in China to compete in the market for tiny EVs there. Its "Battery Day" event is also coming up, where it's expected to reveal a "million-mile battery" that could bring its cars closer to price parity with combustion cars.

But Tesla will need to fix its manufacturing issues if it's to maintain its lead over other carmakers.