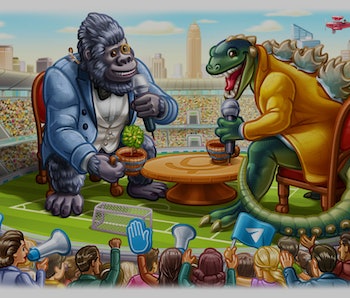 Clubhouse, the (often controversial) voice-only chat app which has seen its popularity skyrocket in recent months, is getting fresh competition from Telegram. The messaging service announced its Voice Chats 2.0 updates earlier today, with a host of new features clearly aimed at challenging Clubhouse’s supremacy. If the WhatsApp rival can drive uptake, the current number one voice chat service could finally see some genuine competition.

While Clubhouse has a long history of facing criticism for fostering toxic echo chambers, many of Telegram’s users are no angels either. Late last year, over 100,000 people were the victims of bot attacks producing highly realistic deepfake nudes, an issue the company appeared more inclined to ignore than address.

Any of these features sound familiar? — While, Telegram’s Voice Chats only first appeared back in December, this month’s new updates vastly expand the service’s offerings. According to the official post, “Admins of channels and public groups can now host voice chats for millions of live listeners” at a time, comparing it to “public radio reinvented for the 21st century.”

While conversations can still be restricted to auto-delete, admins will now be able to record talks, as well as republish them to their followers for later listening. A “raised hand” add-on will also allow muted participants to request permission to speak during a session. Additionally, “bio text is now visible in the list of participants,” info that could help admins categorize participants and their contributions.

Other competitors are on the horizon — Voice Chats 2.0 and its numerous expansions aren’t the only Clubhouse alternatives gearing up to stake their claims in the nascent sector. Unsurprisingly, Facebook is reportedly developing its own, currently unnamed Clubhouse competitor, while Mark Cuban recently announced his own podcast / chat app, Fireside, alongside Node CEO, Falon Fatemi.

While Cuban’s Fireside sounds relatively novel (all things considered), Facebook’s rumors point once again towards the company shamelessly attempting to clone pre-existing, successful platforms for its own benefit... not that the strategy hasn’t proved profitable for it in the past.

Still, with Clubhouse’s recent privacy and leaker woes, its rapid ascent to the upper echelons of social media might foreshadow an equally rapid fall if the company doesn’t address its many internal and user-based issues. Between chat apps and the ongoing podcast wars, it seems that audio is becoming an increasingly profitable avenue for companies. Expect similar rollouts akin to Voice Chats 2.0 to come from other social media platforms in the coming months. And we wouldn’t be surprised at all if Facebook’s eventual product turns up in WhatsApp eventually.