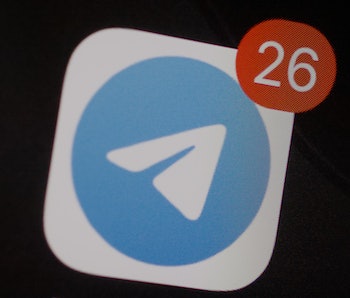 Cybersecurity researchers at vpnMentor have published a new report looking at how the secure messaging app Telegram has become a home for hackers to trade stolen data and tips on how to exploit it.

Ease of use — In the report, vpnMentor highlights caches of stolen website data it found by combing through hacker groups on the platform. The group says that Telegram chat groups sometimes feature thousands of members sharing such data.

The rise of Telegram as a hacker’s paradise can be attributed in part to its ease of use and anonymous nature. The company promotes the encryption of chats and the ability to self-destruct messages after a brief period of time. Users can also share files directly in the app, rather than using some other hosting provider that could shut them down. Together, these features make it an ideal place for even inexperienced code monkeys to drop stolen data.

Companies like Facebook have promoted private messaging and groups as a solution to the toxicity of feeds, but messaging apps like Telegram and Facebook’s own WhatsApp similarly allow harmful content to spread — except in semi-private communities that are harder to police.

Casual hacking — The “dark web” as it’s called, has historically been the home of hackers because special technology masks a user’s IP address and makes it difficult to trace them down. But getting onto that part of the internet is complicated and unintuitive.

vpnMentor fears that the rise of open, casual hacking discussions on Telegram could grow the pool of people who become interested in cybercrime — a rising threat in the United States that has caused major disruptions to serious infrastructure, such as gas shortages caused on the East Coast after hackers attacked a pipeline attack and demanded a bitcoin ransom.

vpnMentor advises that Telegram do more to crack down on such hacking groups. And it warns users that Telegram’s corporate leaders have not been transparent about what type of data they collect from users — so, share your illicit activities at your own risk.