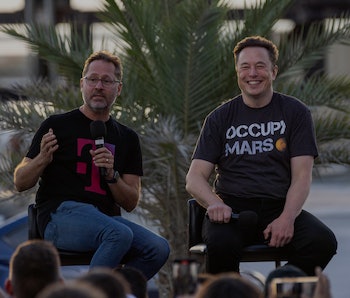 T-Mobile is partnering with SpaceX to bring Starlink’s satellite internet service to 5G phones. The “Coverage Above and Beyond” program was revealed last night at an event led by Elon Musk and T-Mobile CEO Mike Sievert.

The program will essentially allow T-Mobile users to connect to Starlink service in areas where T-Mobile’s cellular coverage just doesn’t cut it. These dead zones will no longer be dead — though connectivity will still be limited to about 2 to 4 megabits per second, enough to send a picture message but not really to browse the web.

5G to the moon — It’ll be a while before you can actually snag that satellite signal: the new setup isn’t supposed to launch in beta until the end of 2023, and no date has been provided for a wider release. That’s because Starlink doesn’t have the necessary infrastructure in place yet; second-generation Starlink satellites will be able to broadcast right on T-Mobile’s 5G spectrum, Musk says, but those won’t launch until next year.

When it does launch, coverage will be available across the entire continental U.S., Hawaii, parts of Alaska, Puerto Rico, and territorial waters, T-Mobile says. T-Mobile subscribers will basically be able to use their phones from any spot where they can see the sky. Sievert says T-Mobile’s most popular plans will be eligible for the service with an additional monthly service fee.

The usability of that connection will vary from place to place. If multiple people are trying to connect their phones to Starlink’s satellites in the same coverage area, they’ll have to split that 2 to 4 megabits per second promised by Musk. And both Musk and Sievert alluded to only some apps being able to use the satellite service; it will be up to each app company to work with T-Mobile and Starlink on ensuring compatibility.

Win-win-win situation — The caveats involved with this deal are significant but not impossible to overcome. The potential good created by the first-of-its-kind deal — for consumers, for T-Mobile, and for SpaceX — make those hurdles worth jumping over for all involved. It’s another big step towards SpaceX’s dream of dominating the satellite internet market.

Consumers stand to gain the most here, really. In the U.S., 5G coverage is still spotty at best, and even baseline cell coverage isn’t available everywhere. The ability to quickly connect to Starlink’s service in the case of an emergency — or even just to send an update while you’re out camping — could be a game-changer.