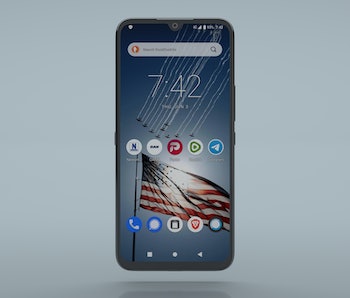 Ah, there’s nothing quite like the sweet smell of an easily debunked scam in the morning. Yesterday bitcoin millionaire Erik Finman unveiled the “Freedom Phone,” which he says is the “first major pushback on the Big Tech companies that attacked us - for just thinking different.” Turns out it’s just a super-cheap Android phone — and a security hellhole, at that.

The teaser video for Finman’s phone is so earnest it begins to read as a parody of itself before he’s even shown off the device. “The Big Tech overlords are violating your privacy and censoring your speech and I think that’s so wrong,” Finman narrates. “That’s why I created the Freedom Phone.”

Finman claims the Freedom Phone is truly the best phone in the world. He says it does everything your current phone does — except censor you and spy on you. It runs an operating system called “FreedomOS” and includes an app store called the “PatriApp Store.” (Are we sure this isn’t just a parody video?)

If it wasn’t clear from Finman’s cringey video, the Freedom Phone is a straight-up scam. And one that somehow manages to be worse at keeping your data secure than an average smartphone. Nice.

Somehow worse for privacy — Let’s take a closer look at the hardware here. From afar, it’s clear the phone is a generic Android device of some sort; this isn’t something Finman built from the ground up.

Cybersecurity expert Matthew Hickey told the Daily Dot that he’s pretty certain the phone in question is an Umidigi A9 Pro, a Chinese smartphone available on AliExpress for $119. Hickey says they’re often bought and shipped in bulk with custom logos to trick consumers into believing they’re specialized devices.

If you couldn’t already guess, a $119 no-name brand smartphone isn’t exactly secure. Hickey says the phone is actually notoriously insecure, thanks to its MediaTek processors. One of MediaTek’s biggest claims to fame is that North Korea loves using their parts for phones due to their “highly customizable nature and low-security barrier.”

The customization Finman has put on his version of the Umidigi — namely FreedomOS and its alternative app store — afford none of the many security protections built by Google in its usual Android operating system. That’s not helpful, either.

People…will buy this — The abstract ideas of “censorship” and “free speech” have essentially lost all meaning at this point thanks in no small part to very loud right-wing thinkers. Official investigations have proven that — as we suspected — Twitter and Facebook are not “silencing” conservative voices at all.

But this has not been enough to stop right-wing Extremely Online people from continuing to spread this disinformation about big tech companies. The Freedom Phone provides a supposed solution to the non-existent problem these people fear.

It’s bad enough that Finman and company have created this privacy monstrosity; what’s worse still is that he’ll undoubtedly convince at least a handful of people to buy it. He’s enlisted other well-known conservative voices to help him advertise it. Candace Owens sent out a tweet about it last night... from her iPhone.

Smartphone privacy is undeniably a hot-button issue right now, and for good reason — we’re more aware than ever of the sometimes-invasive data-collection methods of the companies we’re meant to trust. A $119 bootlegged smartphone is not the answer to that complex equation, though. Not even close.