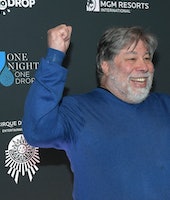 "I think I get $50 a week or something into my bank account after taxes."

Even though Apple co-founder Steve Wozniak hasn't worked at Apple in decades he still collects a paycheck from the tech giant. Woz revealed on the latest episode of Guy Kawasaki's Remarkable People podcast that Apple pays him no more than $50 a week after taxes. That's a net salary of $2,600 a year.

That's a pretty small sum and pretty humble for Woz to not ask for more. But of course, the value of the paycheck is only for symbolic purposes. Woz isn't underpaid; he's not working on any Apple projects and he's not involved with engineering or design inside of Apple. Tim Cook is definitely not turning to Woz and asking him what the next big product should be. The $50/week paycheck is a symbolic gesture.

Still an Apple employee — "I'm still an Apple employee. The only person who's received a paycheck every week since we started the company," Woz said. "I get a small paycheck and, out of it, after whatever goes into the funds that companies have for saving your money...I think I get $50 a week or something into my bank account after taxes."

“I'm still an Apple employee. The only person who's received a paycheck every week since we started the company.”

"It's small, but it's out of loyalty, because what could I do that's more important in my life?" Woz said. "Nobody's going to fire me and I really do have strong feelings always for Apple. The thing is I can't really be inside operations because I'm just too outspoken and honest and I don't want to give that up."

Woz definitely doesn't hold back on his thoughts. In the past, he said the Apple Watch was "not a compelling purchase," slammed Apple for removing the headphone jack from iPhones (while praising USB-C audio), and suggested Apple should pay more taxes.

It's not about the money — Anyone who follows Woz knows he's always been an engineer at heart and isn't in it for monetary reasons. He let Steve Jobs handle the marketing and business side while he focused on his passion: hardware and software engineering, which eventually led to the Apple I and II. In the podcast, Woz said he's never even accessed his Apple stock because he's not a financial guy and doesn't follow stocks closely.

From Woz's perspective, money corrupts and changes people and he doesn't let it steer his judgment.

Despite his $50/week compensation as an Apple employee, his stock and other business ventures total up to an estimated net worth of $100 million. It's safe to say he's not hurting for money.