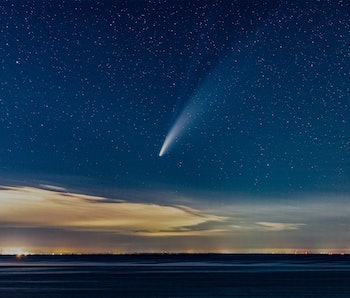 SpaceX sees potential for its Starlink internet service to connect “moving vehicles” including planes, ships, and trucks, according to a filing the company made with the FCC. Starlink has been billed by CEO Elon Musk as an innovative way to connect rural communities to high-speed broadband, and the service has already begun welcoming early customers.

No synergy here — If SpaceX wants to connect moving vehicles in general, and Musk also runs Tesla, it seems intuitive that his cars would stand to benefit from the futuristic satellite internet. But in a tweet on Monday, Musk threw cold water on the idea that a Model 3 could someday be connected to Starlink. “Not connecting Tesla cars to Starlink, as our terminal is much too big.”

The terminal he’s referring to is the satellite dish installed at a customer’s home that is used to beam requests to Starlink’s constellation of low-Earth satellites. Images from early customers show the dishes are quite large.

Starlink is much faster than existing satellite internet services — tests have shown speeds of 130Mbps down — primarily because SpaceX has sent many more satellites into space. More than 1,000 are already orbiting the planet, with hopes to make that 42,000 by 2027. SpaceX has been able to send so many up thanks to its existing business making space transport more cost-effective through reusable rocketry.

Offering satellite internet could provide a new stream of revenue for SpaceX, and the filing with the FCC suggests that the company wholly intends on making money from Starlink. The company told the FCC that an antenna for vehicles would "would serve the public interest" and "allow operators and passengers to access services that enable increased productivity." Just imagining fast internet on a cruise ship or long-haul Amtrak ride shows the potential.

Market opportunity — Though Starlink can provide internet to rural communities, Musk says he doesn’t expect it will ever be competitive with existing high-speed broadband in urban areas. Ground-based telecommunications are much denser and the roundtrip between a user and the information they’re requesting is shorter than routing requests through space. That’s why Starlink is marketed towards people living in areas with poor connectivity. Most of the time, there would be little practical use for Starlink inside a pricey Tesla.

But freight and cruise ships out in the middle of the ocean don’t have great access to internet, making it an ideal market for Starlink. Last year, the company asked the FCC for authorization to test Starlink on the ships that it uses to recover rockets that have landed in the ocean.

More than 10,000 users have begun using Starlink, which operates in at least six countries. The service costs $499 upfront, plus $99 a month for a subscription.