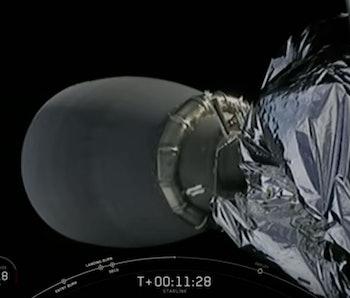 SpaceX's futuristic internet provider in the cosmos, Starlink, has demonstrated in testing that it's capable of delivering download speeds greater than 100 Mbps — or enough to "stream multiple HD movies at once and still have bandwidth to spare." The service has thus far only launched 800 of its planned 12,000 satellites into low-earth orbit.

This isn't your typical sat internet — There already exist satellite-based internet providers, the largest of them being Hughesnet. That service is geared towards customers in rural areas where fiber-line access — cables in the ground — is practically nonexistant due to the high cost of installing it for relatively few customers. But Hughesnet is slow, with top advertised speeds of around 25 Mbps. And there's also Gogo in-flight internet, which anyone who's tried it knows is usually spotty and unreliable.

Crucially, recent test results indicate that the latency of Starlink is between 20 and 30ms, which is important if you're trying to play online games. Hughesnet has ping rates more like 600 to 800ms. Of course, we'll have to see how the ping and download speeds diminish as more people begin using Starlink.

The FCC recently announced that satellite-based ISPs are eligible to compete for $20 billion intended to subsidize rural internet, so there could be good money there if the company rolls out the service in meaningful numbers. SpaceX recently updated its website allowing interested customers to sign up for more information on its beta testing program. It has said that it doesn't expect to offer service to people in urban areas due to the inevitable scarcity of bandwidth its satellites will be able to handle — but who knows, maybe we'll get usable internet on airplanes.

The U.S. military has also announced plans to test its own satellite internet service akin to Starlink, though that network will be purely for government use. Such a persistent internet service could enable fast and secure communication from anywhere on the globe without having to pass through the network of a foreign adversary.

Lasers, man — A crucial aspect of Starlink's technology that will enable fast speeds and low latency is the planned use of lasers to link satellites together and route traffic across the globe at nearly the speed of light. Right now, Starlink receives a request and sends it a command center that requests the webpage, so it's not quite able to route requests as quickly as it could. User terminals on the ground receive communication from the satellites and provide broadband access to groups on the ground. Over time, SpaceX is expected to launch satellites that feature the laser-based technology that it's long touted.

There has been some concern among astronomers that 12,000 satellites in space will interfere with scientific observations. The company says it's addressing this by adding black shrouding the satellites that will stop them from reflecting too much light.