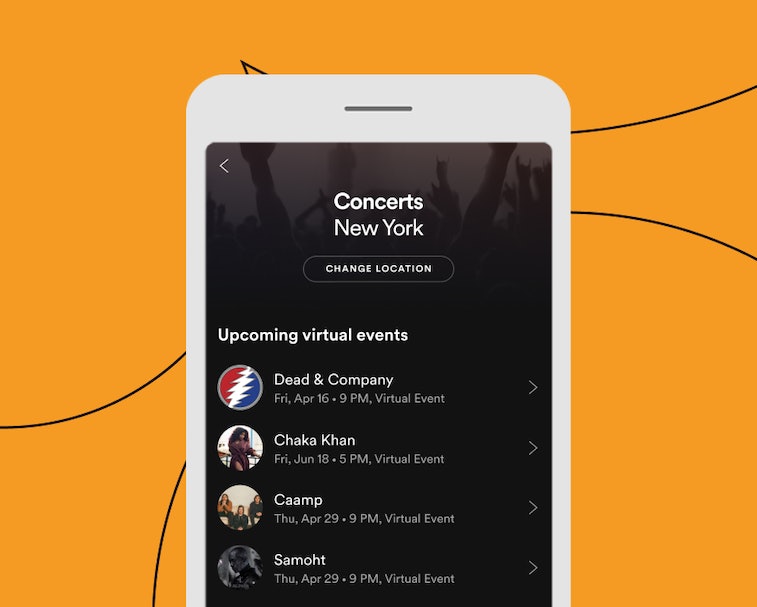 Live music streaming platforms Nugs.net, Mandolin, StageIt, and NoCap are now collaborating with streaming giant Spotify to help connect fans with streaming concerts from their favorite artists. Spotify announced the move in a company blog post, and it also allows users to access these streaming platforms back catalogs in some instances. Aside from giving fans longing for live music something to watch, it should also help bands and artists generate revenue as the pandemic drags on.

During the COVID-19 pandemic, the 1997-born nugs.net has garnered a reputation for bringing virtual concerts from big-name acts like Stone Temple Pilots and Pearl Jam into fans living rooms. Nugs.net says its seen its viewership thrive and that it provided fans with over 900 live performances from acts like Metallica to Jimmy Buffett in 2020 alone.

How do I watch? — If you're a Spotify user, you can access the live platforms’ catalogs of virtual events via Spotify's Concert tab. You should see various artists under the "On Tour" section on iOS, Android, and the regular desktop Spotify apps. The recommendation algorithm will sift through the genres, musicians, and moods you're into to offer up suitable recommendations.

The collaboration with the concert streaming platforms gives users a chance to check out Mick Fleetwood's Peter Green ode, tune into The Who Sell Out documentary, performances by Dave Matthews Band, and heaps of forthcoming ones.

Money for something — The pandemic shut down the live music scene, affecting the revenue of venues, promoters, and musicians alike. Consider the case of Live Nation, which went from conducting some 40,000 concerts and 100 festivals in a typical year to losing 98 percent of its revenue last year. In Live Nation's case, the company has entered a partnership with live-stream platform Veeps to equip over 60 venues with the ability to stream live concerts.

As Spotify brings on Nugs.net and others to keep fans entertained and, hopefully, paying for its services, the Goliath of music streaming will have to also contend with thorny questions about compensating artists. As Consequence of Sound reports, some artists are paid as little as $0.00038 per stream due to Spotify's current remuneration model. The problem for artists, though, is that resistance (as they say) is somewhat futile. You can either accept Spotify’s terms, or pull your content from the service... but if you pull it, there aren’t that many alternatives to choose from, and none of them have Spotify’s subscriber numbers.