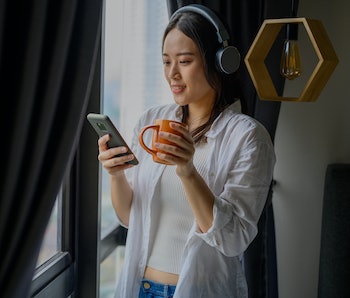 The latest version of Apple’s iPhone operating system makes a number of incremental upgrades that add up to a pretty stellar new iOS. But for some reason, the iPhone’s ability to play music has actually taken a downturn in iOS 15. First Apple Music users found themselves unable to access their song libraries. Now Spotify users are experiencing a similarly distressing issue: Their iPhones are dying at an alarming rate.

Many Spotify users have taken to Reddit and the official Spotify forums since iOS 15’s release to complain about the issue, iMore reports. One Reddit user posted in the Spotify subreddit that their battery hit the 20 percent warning level a full four hours or so earlier in the day when using Spotify over Apple Music.

It’s unclear why Spotify is suddenly causing such widespread battery drain issues for iOS 15 users. The good news is that Spotify is well aware of the problem and says a fix is in the works.

Spotify’s on it — This seems to be one of those rare instances where enough people reported the issue that Spotify felt the need to issue a statement about it. A company spokesperson first posted about it last week, just days after iOS 15’s release.

At first, Spotify had a few suggestions for users experiencing the issue, all of which boiled down to we’re not really sure what to do but sometimes this works! First up: try restarting the app. If that doesn’t work, try reinstalling it. Lastly, the company said, “it’d be great if you’d give disabling Background App Refresh a shot.”

It’s pretty easy to tell from these responses that Spotify had no clue what was going on until users clued its support in. Since then Spotify has provided a status update on the post that confirms the company’s still in the dark about this. “We can confirm all the new info and feedback you shared has been passed on to the relevant teams and we’re actively working on the matter,” Spotify said.

Is Apple pulling tricks? — One Reddit user posted an interesting theory in response to another Spotify listener’s complaint: That Apple Music might just be working more efficiently because it’s Apple-designed software. Apple has, after all, pulled underhanded tricks to boost sales and decimate the competition.

While, yes, Apple Music is always optimized to work with iOS, it’s much more likely that Spotify simply didn’t catch this bug before iOS 15 rolled out. After all, Apple Music had iOS 15 problems of its own until Apple rolled out a quick update.

For now, the best course of action is to watch for Spotify to update its iOS app. The company says it’ll push out an update as soon as it’s discovered the root cause of the battery drain issue.