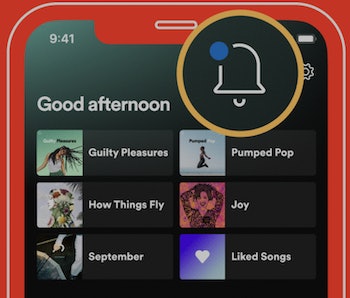 Sure, they tossed us a “New Releases For You” playlist a while back, but that was still far from exhaustive, and mostly reminded us which artists we totally forgot about and subsequently unfollowed. Finally, at long last, it looks like Spotify has gotten with the program by including a “What’s New” feed in its latest update rollout.

The new feature has it all: that standard, cute, universally recognized bell iconography, a little blue dot to let you know when there are new updates to check out, and... well, actually, we suppose that’s pretty much it. “What’s New makes it easier than ever to catch all the latest songs and episodes from the creators you follow. Plus, it’s even updated in real-time, so you know you’ll get to listen to new content just as it’s released,” explained Spotify in an official press release yesterday.

Still, it’s a long-overdue inclusion to a streaming service with so vast of a library. Exact dates aren’t given, but the company says the new update should begin rolling out to iOS and Android “over the coming weeks.” We don’t have it yet, but we’re eagerly watching out for it.

That’s cool, now pay those artists what they’re worth — While the “What’s New” update is immensely convenient for us, we’d honestly forgo it if that meant artists could start getting fairly compensated by the streaming giant. Don’t let PR stunts like the Fresh Finds program or its podcasting distribution enticements fool you — Spotify still grossly underpays actual artists, songwriters, and content creators by default. It’s sort of key to the company’s whole operation, actually.

Spotify’s myriad other services — The What’s New update and Fresh Finds programs aren’t the only ways the streaming company is attempting to stave off competitors like Apple Music and Tidal. Earlier this year saw the announcement of a hi-fidelity subscription package to combat the latter rival, while its continued expansion into the podcasting market is aimed squarely at the former’s market dominance. That’s all well and good, but honestly, the What’s New addition is probably the most helpful update for the app in a very long time.