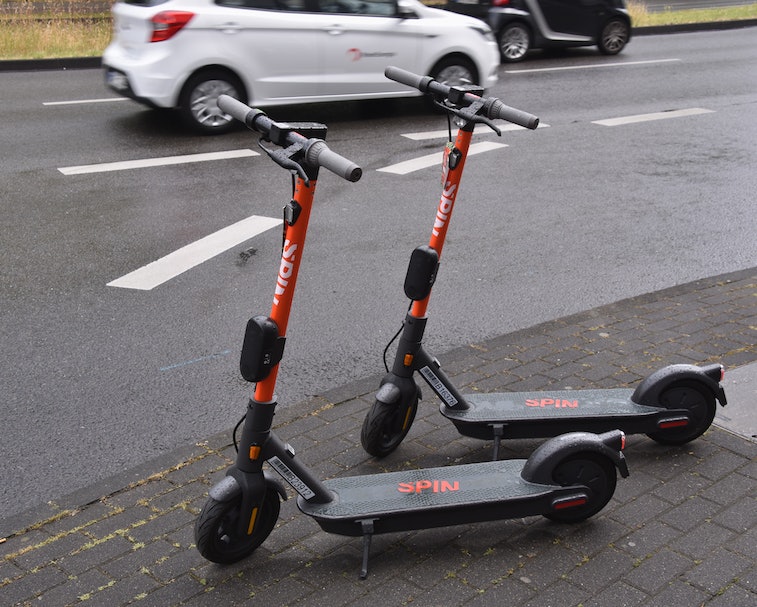 Dockless scooter companies have for years held a stigma in some people's eyes, mainly because the scooters can clog up busy sidewalks or wind up as harmful e-waste when people dump them into a river. That's a shame because scooters are a convenient way to get around town and can reduce reliance on passenger vehicles.

Though companies have started to address concerns of scooter dumping, such as by requiring that riders lock up them to a rack when they're done, it's still common to see scooters in places where they shouldn't be. Ford-owned scooter company Spin hopes to fix that by implementing a technology that allows its scooters to remotely move themselves to an appropriate location.

Remote control — Called Spin Valet, the technology works by using a remote operator to repark scooters with the help of front and rear-facing cameras. Artificial intelligence software supplied by a company called Tortoise assists along the way, effectively making it so the operator can point in a direction and the scooter will do the rest of the work. You can imagine as the AI improves it could someday remove the need for human operators entirely.

Spin Valet is eventually supposed to do more than parking. In the future, Ford says riders will be able to hail a scooter to their location, either in advance of a trip or as they're looking for a ride. That's pretty convenient as sometimes the nearest scooter can be several blocks away, which kind of defeats the purpose of using them to get you that last mile to your office.

Improved safety — Spin Valet will only work with the company's new three-wheeled scooters. Developed in collaboration with Segway, Spin says its S-200 scooter has been designed with safety as the priority.

The new scooter is much more stable than previous models with a new three-wheel drive system and three independent brakes. That's supposed to ensure redundancy, as an early safety issue with dockless scooters was that riders would sometimes begin cruising on a scooter only to discover the single front brake was not working, which is... less than ideal. The S-200 also has turn signals on the handlebars and near the rear wheel.

Industry moves — There's no doubt that dockless scooters are a convenient and eco-friendly way of getting around town, but the industry has recently been forced to undergo consolidation after years of heavy investment and competition.

Poorly built scooters that need frequent repairs, and a shadow workforce required to collect and charge up the scooters, are but two logistical problems that have challenged the profitability of these companies. By joining forces — Lime last year acquired Uber's JUMP business, Bird bought Scoot — scooter brands hope to reduce their competition and use their combined talent to build tougher scooters that can eke out more money per ride. Spin's S-200 is one example of a much sturdier scooter replacing the flimsy, off-the-shelf variants that these startups employed in their early days.

Spin says that it will initially test 300 of its S-200 scooters in Boise, Idaho starting this spring before bringing them to other markets throughout 2021.