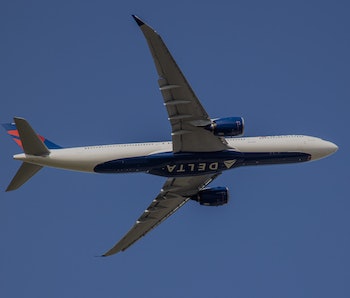 Anyone who’s ever used in-flight Wi-Fi service knows that it sucks. It’s spotty, and when it does work it’s not very fast (we’re looking at you, Gogo). That might be set to change as SpaceX says it’s in talks with airlines to deploy its Starlink service on commercial aircraft.

There are already tens of thousands of customers using Starlink globally, mostly in rural areas that don’t have good broadband infrastructure. The service costs $499 upfront for a satellite dish and then $99 per month thereafter.

“We’re in talks with several of the airlines,” Jonathan Hofeller, SpaceX’s VP of Starlink and commercial sales, said at the Connected Aviation Intelligence Summit. “We have our own aviation product in development… we’ve already done some demonstrations to date, and looking to get that product finalized to be put on aircraft in the very near future.”

We already knew that SpaceX envisioned Starlink being used in moving vehicles. In March, it requested FCC approval to beam internet to vehicles like cars and boats, though not consumer cars because the satellite dishes are too large. This service would be offered for commercial applications, like cruise ships or freight trucks. CEO Elon Musk has said it could be available by the end of 2021.

Starlink will likely never replace broadband internet for most consumers — something Musk himself has admitted — as SpaceX is limited in how many satellites it will be able to send into space. Sending and receiving data also requires a long roundtrip into space and back. Starlink has to send internet requests into space and bounce the requests back down to a ground station before returning the result to an end-user.

$$ — SpaceX makes its revenue transporting people and goods, like mini-satellites, into space. It’s been able to deploy over 1,000 of its planned 4,400 Starlink satellites into space by piggybacking off other missions.

It’s long been believed that Starlink could provide another source of revenue for SpaceX, but simply offering internet to rural communities probably won’t be a big moneymaker. Commercial applications definitely could, however.

Others have recognized the opportunity, as SpaceX has competitors in OneWeb and even Amazon.

Starlink has to send internet requests into space and bounce the requests back down to a ground station before returning the result to an end-user. Because an airplane may be flying out in the middle of the ocean, far from a ground station, there could be a high latency. SpaceX says it will need to upgrade its network so that the satellites communicate with each other using lasers to quickly ferry requests to the closest ground station.